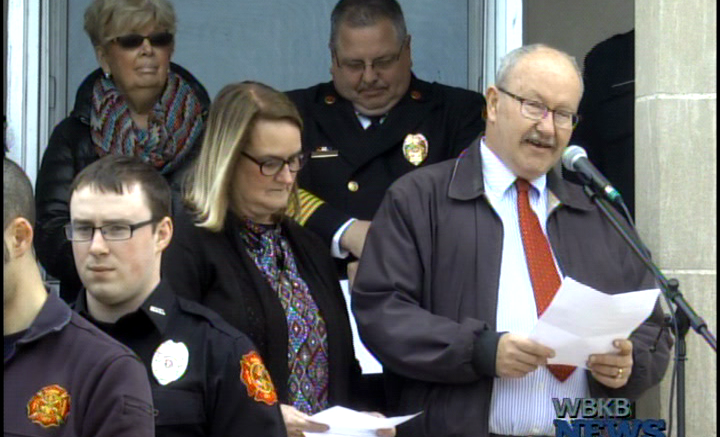 Over 100 people gathered on the lawn in front of the Alpena City Hall Thursday, to honor the National Day of Prayer. The annual event that is recognized all over the United States was held at noon where locals and visitors gathered for an hour of prayer.

The theme for the year was called: “For Your Great Names Sake.” Pastor Doug Bliss presented the message of the hour stating that the not only does the community need prayer, but the entire United States.

“Our nation is in great need of change. We are a divided country right now and we need God’s hand to move in our lives as a nation. We need the people of the United States to be humble, and allow God to come back into this land and bring healing to our land,” Bliss said.

Bliss said in order to see change; it starts within the community through communication with families being an example of the change. There were over 6 prayers during that hour, including prayer for the military, workers of the community, fire and police, and even the media.

“I pray that you would strengthen and direct the well of journalist in our community. Help those reporters stand up to injustice, to expose lies and truth, and to promote respect,” Bill Speer of Alpena News.

A flag ceremony was also held and children from the All Saints Catholic School graced the crowd with a beautiful song. Fire Chief, Bill Forbush said he was proud to see his community focused on faith, and as the Besser Chorus closed, Alpena and the rest of the nation will have ‘Hope in the Lord.”

Alpena hockey’s defense sparks the fire on the ice