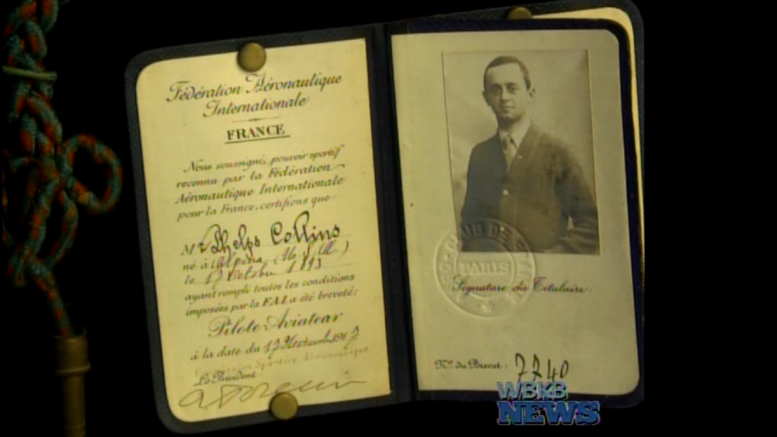 Today marks the 100th anniversary of the day the U.S. entered World War I. To celebrate a local connection to the war, the Besser Museum told the story of Phelps Collins, a World War I ace pilot from Alpena.

The story of Phelps Collins was told via webinar today, to show the significance of World War I, and its impact, which reached even small towns like Alpena. Phelps had a passion for flying, however at the time the U.S. didn’t have a formal air force. But he didn’t let that stop him, as he made his way across the Atlantic to join the French Aviation Corps.

“Despite finding problems in getting across the Atlantic, he fought. He found a way to get where he wanted and do what he wanted, and ultimately became one of a very limited number of men who participated in a…I don’t want to say glamorous, but a very elite force during World War I,” says Museum Collections Manager Danyeal Dorr.

The message Besser Museum hopes to send to youth listening to Phelps’ story today is one of hope. Phelps used his passion for aviation to create a narrative that small town boy could make the ranks of history. Today’s webinar also aimed to show the impact the war still has today, especially in terms of developments in aviation technology.

“In 1914 when WWI was declared, planes were going into combat as reconnaissance vehicles as well. Now, by the end of the war in 1918, planes were now armed, much faster, had bigger engines, were capable of carrying more than one passenger, were able to maneuver much better in the air and a whole variety of changes that happened in such a short time that otherwise would take years,” says Dorr.

Phelps’ memory is preserved in both France and in Alpena, with a monument near Paris commemorating his contributions to the war effort, as well as being the original namesake of Alpena’s Air National Guard Base.