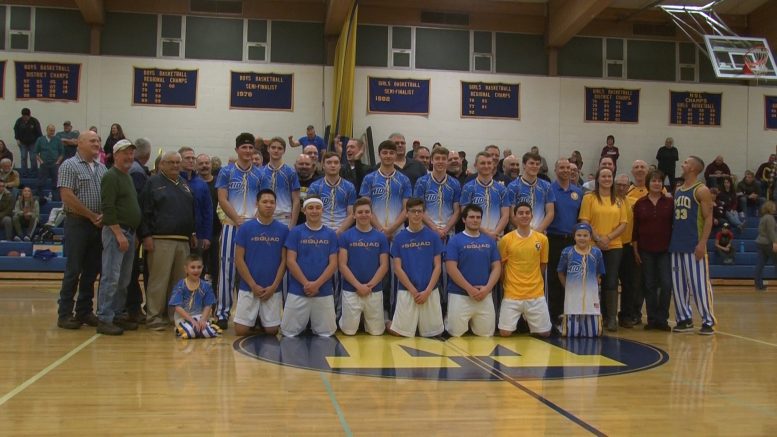 MIO, Mich. — The Mio Thunderbolts are known for their dominance on the court, and it all began with the 1978 state semi-finalist squad. Then in 1989, the Thunderbolts brought home their first and last state championship. Now for their 30th anniversary, both teams returned to Mio where memories were made.

“Like right now I get goose bumps. We were in the trenches, the fox hole together, battling, sweat, blood, and tears. ” said 1989 team member and Mio Head Coach Ty McGregor. “Just being with them again, it was an amazing night.”

For current Thunderbolts, like sophomore Drew Hess, remembering Mio’s championship is motivation for a strong season.

“It’s really cool just to see everybody come back,” said Hess. “Some of them didn’t even get to come back and watch us for a long time.”

“He’s scoring 2,841 points without the three–point line,” said McGregor. “I don’t think that will ever be touched.”

The 1978 squad is remembered for their regional final win over defending state champion Glen Lake 72-69. That put the Thunderbolts at (23-1) and they finished the season (24-2).

“They weren’t giving us the chance,” said Smith. “We were down 16 at half. We came back and we beat them. It was kind of the crown jewel. I think that’s the game everybody kind of remembered. It kind of got Mio on the map.”

“They’re just a good bunch of guys, and I also refereed Jay (Smith) when he played,” said Wakeley. “It’s just a pleasure to come to Mio.”

Over ten years later, Mio’s confident team went undefeated (28-0) winning a state title, and now McGregor, who played on that championship team, hopes to bring back another trophy.

“Oh yeah, his mind is definitely in it,” said junior River Waisanen. “He told us in practice a couple of days ago, his playing days are over, but he still wants to get better coaching, learning from us, and us learning from him.”

At the helm for the (2018-19) season, McGregor has led Mio to a (6-1) start. The Thunderbolts only loss was to Oscoda 35-33 on a Brayden Mallek buzzer beater layup. McGregor’s energy and leadership keeps the athletes focused.

“As a coach he is super upbeat,” said Hess. “He is always in a defensive stance. You know he wants us to do good things.

In 2018, the blue and gold’s season ended at the regional final, and as a freshman Hess landed a spot on Michigan high school’s list for three–pointers made in a single season (2017-18) with 81 in 24 games played. Now Mio returns a strong roster for another year.

“This is definitely a winning culture here,” said Waisanen. “They definitely set the foundation for us to just play here, and I mean I wear these colors with pride for sure because of them.”

While their skills may have faded, the memories and legacy will never be forgotten at Mio High School. In 1998, the Thunderbolts ended another strong season as the state runner up in Class D.

The current Thunderbolts hope to take their talent to Mio’s fourth states appearance, but it starts in 2019 against Hillman on Friday, January 4th.

Alpena Fends Off Cheboygan To Win 55-31 On Senior Night

Mio Wins In A Rout To Move Onto Regional Finals