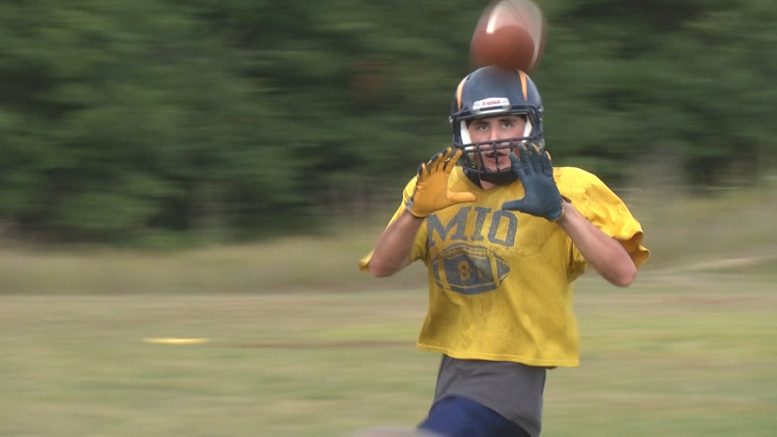 MIO, Mich. — Mio High School was in desperate need for some assistance if they were going to keep their football program alive. That’s why MHSAA allowed the Thunderbolts to drop down to 8-man football in 2019. Mio is the 29th largest school in the 8-player field with an enrollment of 168 students. In Northest Michigan, only Onaway is larger than Mio with 182 students. Just check the numbers:

The Thunderbolts have not won a game in two years of 11-man play, and this year things are going to change. Being a smaller school in Michigan makes it tough filling up the roster, and Head Coach Jason Socia is excited about dropping down and matching up with similar schools.

“Get our program back and get it competitive,” said Socia. “We have a long standing tradition here of winning league titles and at one point we made the playoffs 16 years in a row.”

“Last year, we were really outnumbered,” said Mio senior running back and linebacker Pete Socia. “We had no business playing some of those schools. Saginaw team we played, we had no business. This year it’s back to the original North Star League and I feel like we are really going to be competition.”

The drop to the 8-man game also encouraged athletes to sign back up to play football, including three very tall basketball players, Drew Hess, Brennon Mills and River Waisanen.

“All three of those guys weren’t with us last year,” said Head Coach Socia. “They’re all 6’–plus. They can all go up and high point the ball and catch the ball.”

“We’ve got a great quarterback, Brendan DeFlorio,” said Pete Socia. “He’s played every year on varsity and he’s probably got the best arm in the league.”

Speed is a big part of 8-man play, but Mio hopes to use their big linemen to their advantage especially in the run game. They average about 210 lbs.

“As much as we have speed, I believe we also have power,” said senior offensive and defensive lineman Trevor Pellegrini. “I think we have the power to run it down their throats and that’s what a football team needs.”

For a team that has not won a game in two years, expect the Thunderbolts to strike this season and Head Coach Socia believes they can break the losing streak.

“Don’t go to the concession stand because you’re going to miss something.”

Battling for an 8-man title: Posen vs. Au Gres-Sims