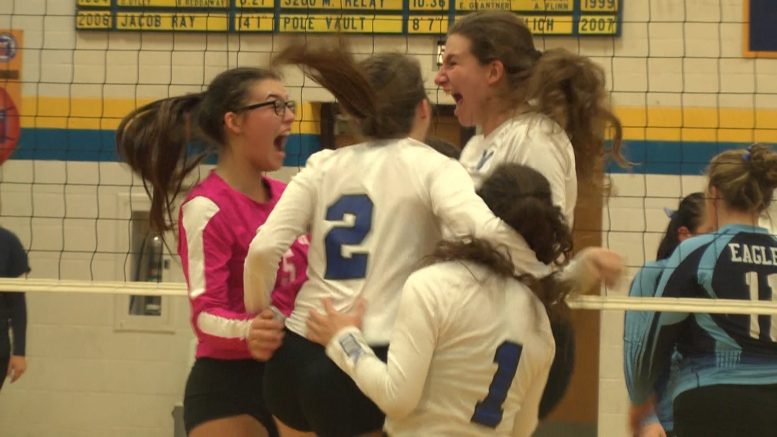 MIO — The Mio Thunderbolts battled the Hale Eagles for the district final in Mio, and this one was a battle till the end going to five sets. Hale flew to an early 2-0 lead behind the efforts of spikers Nichelle Hence, Kaylee Collins and Karli Lacosse, but then Mio made a comeback starting with a set three 25-19 win. Next set, the Thunderbolts struck an early 11-8 lead before Hale called a timeout. Then Eagles called another timeout at 18-9 after a deep tip by Mio sophomore Reagan McGregor. The Thunderbolts would cruise to another victory in set four 25-14.

This game came down to a tiebreaker fifth set. Hale cruised to a 6-3 lead with the help of sophomore setter Claudia Cadwell’s dump set over the net. Timeout Mio. That’s where the scale tips in the Thunderbolts favor. The game came down to a diving save by senior birthday girl claudia Wilson and a Mio double block by Krysta Marble and Phynix Rickett to seal the deal taking set five 15 to 10.

This is Wilson’s first district title since her freshman year in 2015, and this was a very special 17th birthday present.

“Probably the best birthday gift I could ever ask for,” said Wilson. “We did it because we lost two sets, and we came back from that, and it was a close game, and shout out to Hale for that. They played a good game, but we came through.”

Up next, Mio faces Bellaire on the road for the regional semifinal on Tuesday, November 6th at 7:30 p.m.

Mio and Hillman eliminated from playoffs after great season