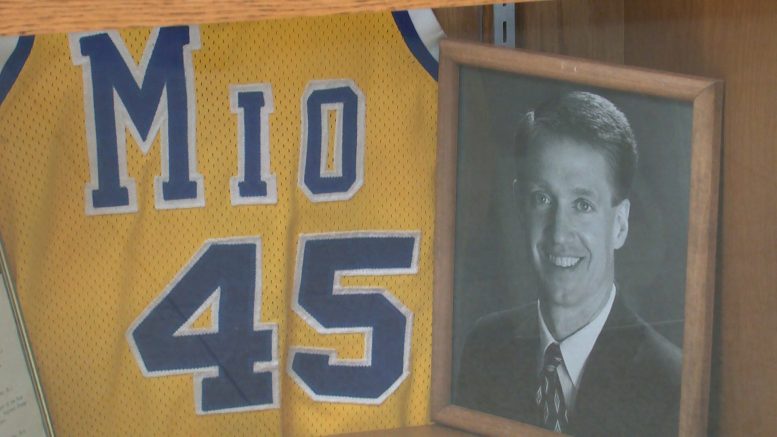 Michigan — For a decade, the Basketball Coaches Association of Michigan looked to fill in the gaps for their top basketball stars. Starting in 1981, the BCAM gave the honor of Mr. Basketball to the top athlete. They decided to go back as far as 1920. Now the project is complete and one local legend made the list.

Mio Thunderbolts’ Jay Smith was named the 1979 Retro Mr. Basketball. The 6′ 5″, 192 pound star remains the top career scorer in the state of Michigan with 2,841 points. That record might never be touched, and he did that without the three-point line.

Smith set a single season scoring mark as a junior with 912 points, and then he topped it as a senior with 952 points. In 1978, he led the Thunderbolts to the state championship where the team finished second overall.

To this day, his name with his career points total hangs on a banner at Mio Au-Sable High School. Smith is currently the Kalamazoo College men’s basketball head coach.

James Koger, Saginaw, 6-foot-4, 190– a 1,000-plus career scorer who averaged 19.7 points 11 rebounds and shot 47 percent from the floor” said the AP. “He ran the Saginaw offense,” added the Free Pressin their first-team All-State write-up. “When he wasn’t in the lineup, Saginaw was a very ordinary team.”

Melvin McLaughlin, Grand Rapids Creston, 6-foot-1, 170– Considered the state’s top “pure shooter,” McLaughlin scored 1,577 points, a 25.4 average, in his three-year career at Creston. Exceeded the 35-point mark in a game on four occasions as a senior.

Evaristo Perez, Orchard Lake St. Mary, 6-foot-8,210 – Despite being in the US less than two years, the Dominican Republic native averaged 22 points and 15 rebounds while hitting 57 percent of his shots. ‘He’s a real competitor and a leader on the flow,’” St. Mary coach Bob Shoemaker told the Free Press. “We do a lot of things on the court, and he picked them up right away.”

Derek Perry, River Rouge, 6-foot-6, 210– Coach Lofton Greene told Hal Schram that Perry was “probably the finest offensive player he has ever coached.” Averaged over 28 points per game and “an incredible field-goal shooting percentage of 64 percent” entering the postseason.

Erich Santifer, Ann Arbor Huron, 6-foot-5, 165. “He has been the most valuable player in the rugged South Central Conference two years in a row,” said the Lansing State Journal at tournament time. “He prefers to work inside, but can also produce from long range as well.” Santifer held a 22.3 points per game average headed into the tournament regional final against Lansing Eastern, then scored 36 points against the Quakers in the contest, in which Huron was eliminated. “He’s probably the finest player we saw all season,” said Lansing Eastern coach Paul Cook. Later excelled at Syracuse.