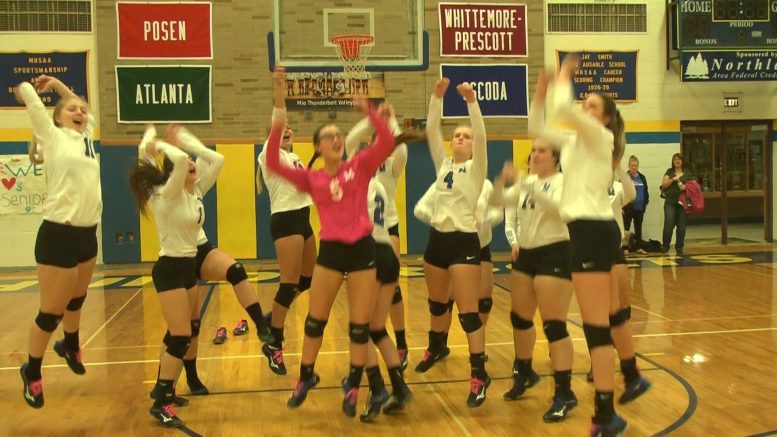 The Thunderbolts celebrate as they get ready for their district final.

The 6 pm game featured Hale and Fairview in a battle of the Eagles. Hale won 3 sets to none thanks in strong part to sophomore Kaylee Collins, sophomore Morgan Vance, and senior Karli Lacrosse. The win gives Hale a ticket to the district final.

The second  game featured Mio and Au Gres. The first set went into extras as Mio pulled away with a 26-24 victory. Mio began pulling away in the second set as senior captain Claudia Wilson helped lead the team on offense and on serving runs. The Thunderbolts won the second set 25-16.

Despite standout performances from Keagan Skacal and Victoria Selle, the Wolverines fell in straight sets to Mio as they lost the third set 25.16. In addition to Wilson: sophomore Reagan McGregor and junior Emma Bombe helped the Thunderbolts make it to their district final.

The final will be played on Thursday, November 1st at 7 pm in Mio. Hale and Mio played previously this season, with the Thunderbolts winning 3 sets to 1.

It’s do or die for the Wildcats as they host St. Johns on Game of the Week