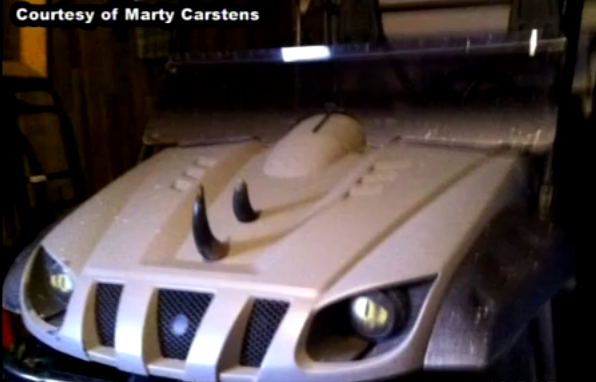 Michigan State Police Alpena Post is still looking for the suspect or suspects that stole an ATV from Dinosaur Gardens in Ossineke.

According to the police the 2005 Yamaha Rhino was stolen from the property back in November. The owner of the gray ATV, Marty Carstens said he believes someone downstate may have possibly taken the ATV during hunting season.

“I was born and raised in Ossineke and I never personally been a victim and I was pretty heartbroken that it was stolen from me. Everybody knows me and my family locally, and we’re local business owners. I now lock my house more often, and make sure everything is secure. That’s something I haven’t had to worry about before. What would I say about someone who stole it, I just…I don’t think much of the people that feel the right to take other people’s stuff, hard earned stuff,” Carstens said.

The 2005 Yamaha Rhino is gray and has 2 horns on top of the hood with yellow snake eyes for headlights.

If anyone has any information on the stolen ATV please contact Crime Stoppers at 1–800–422–jail.

Ossineke woman charged with OWI, possession of a controlled substance