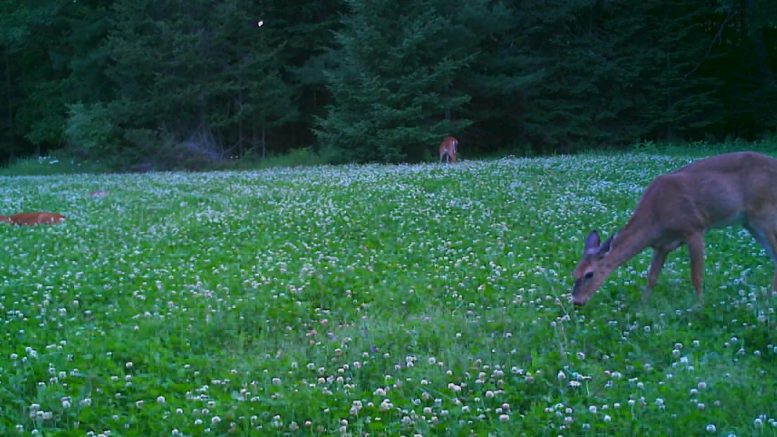 Deer in a Michigan food plot.

Alpena, Mich. — For the first time in Michigan hunting history, baiting is illegal for the entire lower peninsula. While this is not new for Alpena County, others will have to adjust and find new ways to hunt deer. Baiting has not been allowed in Alpena for over 20 years due to the spread of Bovine Tuberculosis.

“For TB they’ve narrowed it down to just this area,” said DNR Conservation Officer Jessie Curtis. “It’s obviously worked, the no baiting stuff. So we’ll see how it works for CWD.”

Chronic Wasting Disease, which is a fatal central nervous system disease, is affecting counties in southwest Michigan. Even hand-feeding deer for recreation is illegal and DNR officers will issue a citation, but the big question for hunters has been about using apples hung in a tree for a mock scrape.

“Remember deer can jump and they jump for food and they’re big animals,” said Curtis. “Put them (apples) really high because it has to be totally inaccessible.”

Baiting brings in too many deer to one area, which is why food plots are becoming a good alternative. Tony Polk, owner of The Food Plot Shop, found that clover is a must when attracting deer to private land. Hunters do not necessarily need a tractor to create a food plot. Even a broadcaster to plant the seeds will work. DNR Wildlife Health Specialist Emily Sewell hopes hunters who bait will look into food plots.

“The primary difference between feeding and baiting and food plots focus on congregating deer to a relatively small area and repeated placement of feeds for the deer in that small area.”

If anyone is interested in creating a food plot and bettering deer habitats, the DNR is offering a $2,000-$10,000 grant for northern Michigan private land owners, the NLP Deer Plan. Local surrounding counties, such as Alcona, Alpena, Montmorency, Oscoda and Presque Isle, can apply to the Deer Habitat Improvement Program that funds $500-$2,000.

“To maintain the deer heard and help it grow,” said Curtis. “I know that’s what most hunters just want anyway, so we’re trying to help out that whole industry and hopefully have a heard for the future generations.”

Here are some helpful reminders with regard to the regulations around baiting and feeding deer:

Marksmen Monday Ep. 2 – Down With The DNR