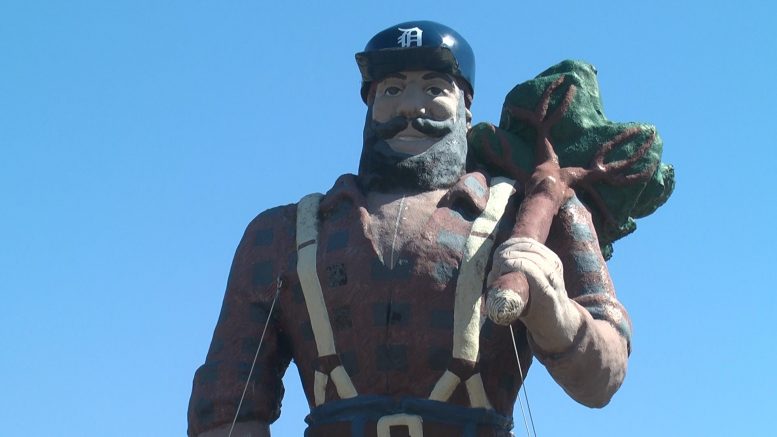 Oscoda, Mich. — The Oscoda Township is home to the Detroit Tigers biggest fan, Paul Bunyan. The 13-foot tall statue, not including the base stands at Furtaw Field in downtown Oscoda, and a few members of the community decided to dress Bunyan up with a Tigers baseball cap.

“I just had the idea thinking about it as an April Fool’s joke in the beginning,” said Bill Tait, co-owner of Tait’s Bill of Fair restaurant. “Then realizing the start of the season is April 1st usually, so we decided to get it in for April Fools and have some fun with it.”

Sharon Ostrander from Truly Yours helped create the cap. It was originally a construction hat turned into a Santa hat for the holiday season. Chris Kitchen from Oscoda’s Department of Public Works was honored with putting the cap on Paul Bunyan. Lary Holland from Tier 4 contacted the Tigers’ to get licensing approval, and Detroit sent them a logo for the cap.

“It’s kind of exciting,” said Becci Schirrick, a Real Estate Sales Professional at Sunrise Realty. “We like new bright things into the community and Paul needs to wear a different hat once in a while.”

In 2005, the town was recognized by the Michigan House of Representatives as the official birthplace of the Paul Bunyan literacy legend. The claim was made because the Oscoda Press in 1906 first published the tale, “Round River”, by James MacGillivray.

“It’s kind of fun to say we’re the ones that can lay claim to him, said Oscoda Press Editor Jason Ogden. “At the end of the day it’s a whole Michigan thing to be proud of.”

Back in the 1880’s when these tales would have floated around Michigan the state was producing as much lumber as the next three states combined, so Paul Bunyan was the perfect mascot for the loggers.

“You know honestly, with him holding the tree it looks like he’s holding a bat,” said Oscoda resident Tyler Lara. “With the hat it just kind of goes with it.”

The Oscoda Township did not say when the cap will be removed, so maybe Paul Bunyan will wear it until the World Series.

“You know my daughter said it might be a magical playoff hat for them,” said Tait.

Hillman Aims For Better Execution in 2018