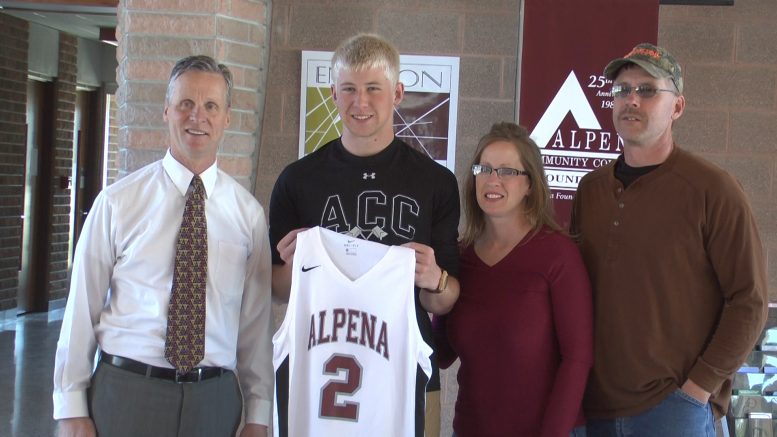 Alpena, Mich. — The Alpena Community College Lumberjacks have been busy signing basketball players in the offseason, and one local can say his dream came true. Alpena Wildcat Haydn Goebel signed his letter of intent to play with ACC next season.

The six-foot-four, 210 pound post player averaged only two points and three rebounds per game with the Wildcats, but Alena Head Coach John Pintar said his strength as a player is more in his effort on the floor.

“He is a player that gives you maximum effort all the time”, said Pintar. “He will do the little things for ACC and be a great team player.”

This moment has been a dream for Goebel since his sophomore year when he walked up to ACC Head Coach Mark Jacobs and asked what he would need to do to one day play for the Lumberjacks.

“I thought it was really cool and I really wanted to do it,” said Goebel. “I knew I’d have to work on dribbling and rebounding and just being an all-around better player.”

He did just that between his sophomore and senior season, and when the time came Jacobs knew he had to offer Goebel a spot on the roster.

“I saw him two months ago and said he needed to put on 20 pounds,” said Jacobs. “He’s already put on ten pounds, so the family, they’re work ethic is second to none and he does the right thing all the time. You never have to ask him to do something twice.”

The Wildcat was handed a number two jersey, since he will be Jacobs second athlete of the family to coach. Haydn’s brother Levi ran cross country at ACC. Goebel’s initial role will be to battle the big men down low and practice, working to get better for more time on the court.

Wildcats get revenge on Cheboygan