Shawn Muszynski caught a Brown Trout over 14 lbs. on Thursday, more than doubling the weight of the next highest.

Bringing it in he knew he had something special. “We knew it was something big,” he said. “Then, after we saw it, that’s when we had the adrenaline going and shaking. Then it was more of speed control and trying to slow the boat down.”

Tim Wieczorkowski was amazed when the monster fish was brought in, because he had started stocking Brown Trout in Thunder Bay about seven years ago. This was one of them. 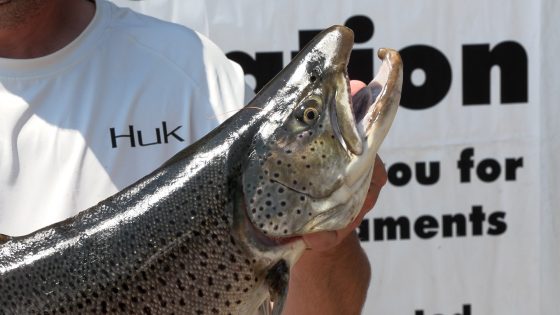 It’s a rare sight to see one of the fish he’s responsible for putting in the water. “I don’t know of any plants that are even close to this area,” said Wieczorkowski.”Last I know, with the DNR, there’s nothing on this side of the state. So, all the browns being caught are from the plant we are doing usually late fall.”

“It’s awesome what they’re doing here,” said Muszynski. “I think we’ve been seeing a lot of reproduction in the browns and we’ve been catching a lot more. I think it’s a really good thing what Tim’s being a part of and doing that and raising money for that.”

The stocking program Wieczorkowski started has grown over the years and, through donations from people in the area, the population of brown trout has been growing as well. “Every dollar counts and every time someone donates $20, $50, it just makes the festival better and now we’re starting to see the rewards,” he said.

Anyone looking to donate towards the stocking efforts or offer help are encouraged to call Wieczorkowski at (989) 657-9365.