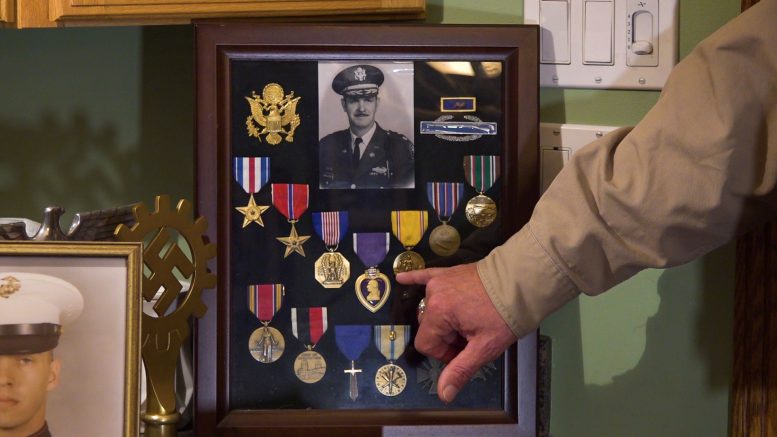 ALPENA, Mich. – Some 18.2 million living veterans were honored in our nation this week, and let’s not forget the thousands who have died protecting our land and our freedoms.

Clemet Van Wagoner was a national guardsman, a World War II veteran, but above all an inspiration to the community and his family.

Van Wagoner’s only son, Clayton, walked to his father’s grave site at Evergreen Cemetery. “This is where my father and mother are,” he said.

Clemet Van Wagoner is one of the most decorated soldiers of WWII. Van Wagoner served 600 days of combat and returned to battle after being wounded five separate times, according to Congress. He fought in the largest seaborne invasion on D–Day, making him one of only 32 survivors of the 1,800 soldiers who landed with the 1st infantry division at Omaha Beach.

The hallway is dawned with memories of Clay’s father. “I’m very grateful they put this on display and named the clinic in my dad’s memory. He was a humble man. He didn’t really want to be recognized for anything. He just did his duty.”

Clay walked down the hall and stopped in front of a timeline. The timeline displayed some of the more important events in Clemet’s life, including photos of family, distinctive honors and fellow military comrades. Clay said, “that’s my dad; and my son, Connor; and my daughter, Courtney; and my daughter, Danielle.”

Connor Van Wagoner was about 8 or 9 when his grandfather passed away. “He knew him,” said Clay, “as his grandpa….[Connor would] sit on his lap, and grandpa would entertain him and tell him stories. So he knew his grandpa.” There’s a photo on the timeline of Connor sitting on his grandfather’s lap.

Clay lives a quiet life with his wife and two dogs in Alpena. His wife makes him a cup of coffee as he reminisces on his father’s legacy at the kitchen table.

“You know, I remember lots of stories,” said Clay. “My dad told me a lot of things about his experience. I guess when I was a young child he would primarily just tell me about his friends — people he knew.”

Clay served in the Army Reserve. He didn’t inherit his father’s resume, but Clay and his son live to carry on the Van Wagoner name.

“I did not serve in the capacity that my dad did,” said Clay. “I never was in a combat zone. I want to make it perfectly clear that I am not a hero of even the closest, but I did have the pleasure of serving, and I did get to serve with several heroes — great men of this nation. But it was my pleasure to serve in the military.”

Clay said his father didn’t look for accolades, “he was a humble man with a heart to serve his country.”

Clay gets up from the kitchen table and walks over to the counter. He points to all the medals and honors his father left behind. There’s about 21 medals neatly cased.

“That’s the Silver Star. That’s the third highest award you can receive for combat.” Clay added, “that’s the Bronze Star. He received that award three times…This is a Soldier’s Medal. This is the Purple Heart.” Clemet suffered wounds while serving and received the Purple Heart three times. “Out of all of these, probably the one that he most likely to be identified with was this award right here.”

Michigan’s most decorated WWII hero wore only one bar of ribbons. If he wore them all, he would have a lot of them. Clemet always pinned on his CIB — Combat Infantry Badge — his favorite.

Clay points to a separate case of medals. “These are the medals my dad actually received,” said Clay. “Those were pinned on his shirt when he received the award.”

When asked of his favorite award, Clay said, “my favorite one is that he survived and came home.”

There’s something to be said about great American war heroes. Perhaps it’s their bravery, or strength, or their will to lay down their life for millions of families back home. The stars and stripes on the flag waving on Clay’s porch represents freedom. Between every stitch is pride.

Death can’t bury a strong legacy nor would anyone forget Clemet Van Wagoner, Michigan’s most decorated veteran of WWII.

“He was a great man,” said Clay. “He was a war hero, and he’s been gone for a little over 10 years. But he was a great guy, a father, and I loved him dearly. His memory lives on.”