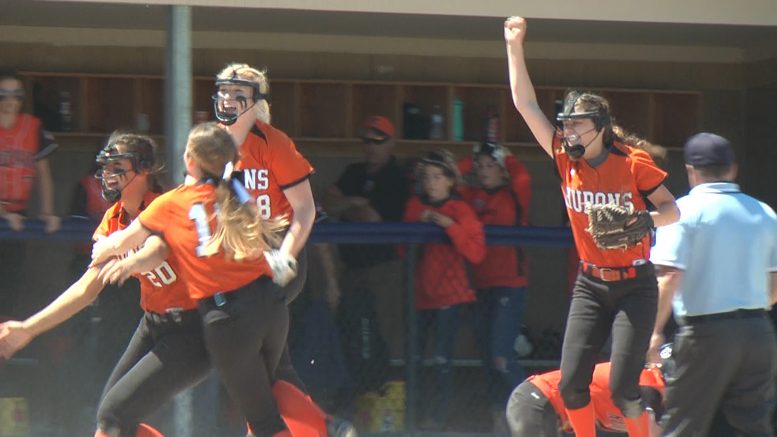 PETOSKEY, Mich. — Rogers City has done it again. The Hurons punched their ticket back to Michigan State University for the state semifinals, but first the Hurons had to take down the Rudyard Bulldogs, the same team Rogers City faced last year in the state quarterfinals. The Hurons split a double-header with the Bulldogs this year, and the semifinal match was definitely a dog fight.

The game was a pitchers duel and defensive battle up to the fourth inning. That’s when sophomore Paige Postma hammered a shot deep left bringing home the first run of the game. Rogers City finally answered in the top of the sixth thanks to their sophomore, Kayla Rabeau. She drove a shot through the gap for a 2 RBI double with Alissa Bowden and Linnea Hentkowski scoring the runs of the game.

“I fouled a lot of balls. I started to freak out a little bit,” said Rabeau. “I got that good pitch, so I swung. I got the hit and I was freaking out. Everyone was cheering. I was just whoa, it was exciting.”

This one came down to the bottom of the seventh with two outs and Bulldogs’ Desta MacDowell on third. The sophomore bit off more than she could chew looking to beat the throw back to third from Hurons’ senior catcher Amanda Wirgau. Catheryn Hart secured the tag and out sending Rogers City back to East Lansingn with the 2-1 victory.

“It’s just everybody working together,” said Head Coach Karl Grambau. “This team has really come together this year, and that’s one thing that this team really has is unity. They really pull for one another all the time.”

Up next, Rogers City battles Unionville-Sebewaing in the state semifinal on Friday at 12:30 p.m. Both the Hurons and Bulldogs fell short in the semis last year. Earlier this season the two teams squared off, and Rogers City came out on top 5-4.

Rudyard proves to be a good test for Rogers City