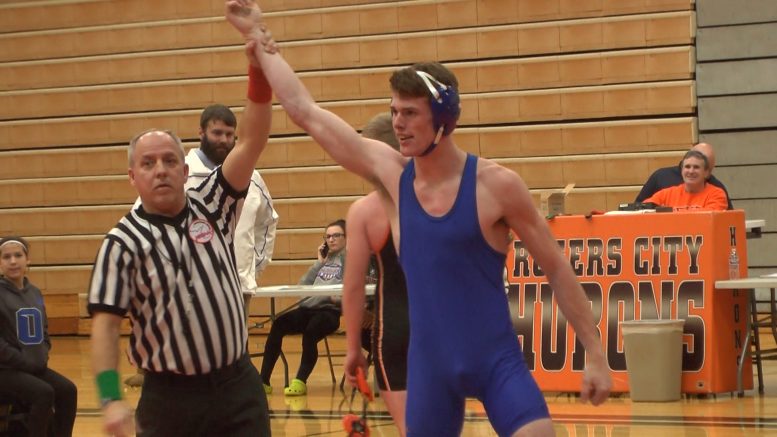 ROGERS CITY, Mich. — The Rogers City Hurons wrestling team hosted Oscoda, Alcona, and Ogemaw Heights in a four team meet. In the first round of matches Rogers City squared off with Oscoda, while Alcona went up against Ogemaw Heights.

Rogers City got off to a fast start as Anthony Paull recorded a pin on John Heisner. From there, the Owls were able to climb back and win 40-25. Oscoda’s one and only pin came from Robert Host (152) as he defeated Austin Bielas in 1:16. Across the gym, Ogemaw Heights took down Alcona 51-15.

In the second round of matches, Ogemaw Heights took on Rogers City, while Oscoda went up against Alcona. Rogers City got off to a hot start as they picked up two early wins from Clayton Henry (171) and Damien Segorski (189).

Eventually, Ogemaw Heights would even the score up at 30. After losing to Robert Host in the first match, Austin Bielas (152) got revenge. It only took Bielas 23 seconds to pin Gage Macko. After that, Anthony Paull picked up a crucial win over Jace O’Grady as Rogers City defeated Ogemaw Heights 42-30.

Oscoda didn’t have any issues in their second match as they defeated Alcona 72-0. Oscoda recorded three pins that came from Robert Host (152), Dylan Judd (125), and Chris Cummings (145).

The Owls return to the mats on Saturday as they will be competing in the Mt. Morris Invite. Alcona and Rogers City are back in action on Jan. 22. They will be in the same meet taking on Mio and Whittemore-Prescott.

Larson, Onaway are putting the pieces together