Hope Not Handcuffs, an initiative by families against narcotics to get addicts the help they need and keep them out of jail has officially arrived in Alpena. The ribbon was cut on Thursday at the Alpena County Sheriff’s Office.

Families against narcotics started hope not handcuffs in 2017 and the program has since expanded throughout much of the state. 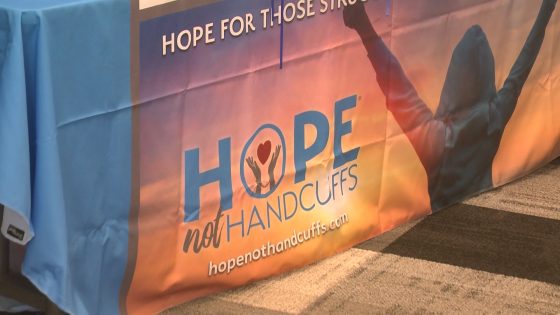 Working with the sheriff’s department, it will give those suffering from addiction the chance to seek treatment before they end up in jail. “Essentially, what that looks like is an angel will be assigned to you and will walk you through the process of getting the treatment,” said Ryan Reblin, regional director for Families Against Narcotics. “This person’s sole job is to find a place for you to start your treatment.”

Often times, when addicts don’t seek treatment, they end up getting caught and being sent to jail and that’s something Alpena County Prosecutor Cynthia Muszyinski said can be an ever-repeating cycle. “Addiction can lead to a lot of recidivism, a lot of visits to jail,” she said. “So, anytime that you can intercept that and start to work on the actual problem of addiction it will ultimately lead to less recidivism and less crime in the community.”

Since the Hope Not Handcuffs program began, it’s helped treat 7,319 people in Michigan. There are also 113 chapters across the state, with the goal to keep it growing. “We are in constant conversations with communities but we are hoping to have a lofty goal of having a chapter in every single community in Michigan,” Reblin said.