ALPENA, Mich. — A protest is scheduled for Saturday in Downtown Alpena against former undersheriff and current candidate for county sheriff Terry King.

National Political Activist, Bob Reid recently used the freedom of information act to uncover text messages that were sent from King’s work phone while he served as undersheriff. Text messages that dated to October 2013 show King sent a picture of a gay couple holding hands to his daughter, and said, “these guys are holding hands. Where is my fricken gun.” This was followed by a few text messages later with, “bang bang.” 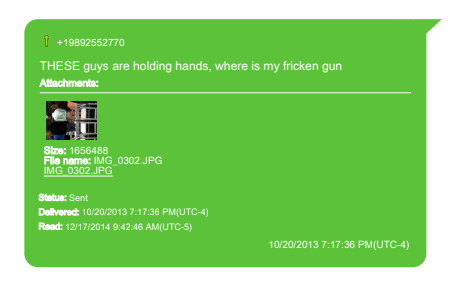 “He didn’t just give it to a couple people,” said Reid. “He sent them to his wife and his daughter. It paints a different picture because it makes you think, wait a minute, he’s so comfortable with his hatred, that he shares it with his immediate family.”

Since these texts were revealed, a number of people have shared them on Facebook and now one member of the LGBTQ community has organized a protest walk against King set for Saturday. Suzy Langeveld said that when she read the texts she was horrified. “For someone to have violent hatred, wanting to shoot somebody for holding hands, that really scared me to a point,” she said. “So I was really hurt and scared but I was sad that there are people that really feel that way.”

We reached out to King for comment on the allegations and the planned protest and received this response: “I support everyone’s first amendment right to peacefully express their thoughts.”

The protest is scheduled for 11 a.m. on Saturday and the walk will begin in the parking lot in front of Michigan Works and will end outside King’s campaign office next to Bigby Coffee.

The Salvation Army of Alpena is helping kids this winter

The Salvation Army of Alpena is helping kids this winter

Ossineke woman arrested for embezzlement from a vulnerable adult

Gamers throw down at Bullpen