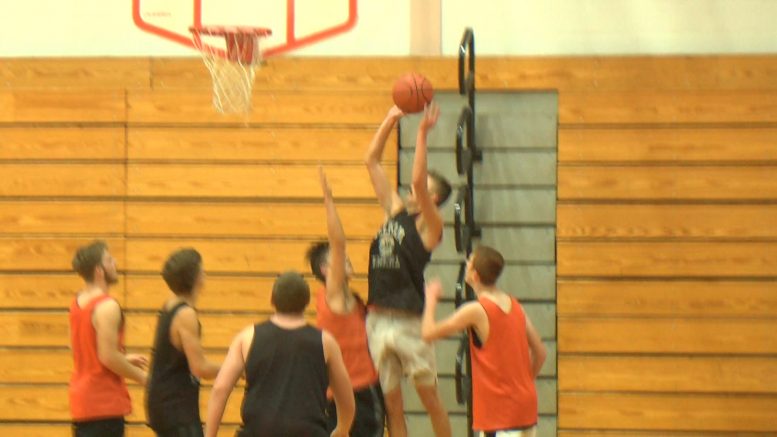 Nic Taratuta goes up for a layup during Hillman's preview season.

HILLMAN — Winning in basketball seems like a given in Hillman. The Tigers have won their conference every year since 2014. The Tigers understand that their past success doesn’t guarantee another winning season.

“We look back at what we did and how we got there,” Steinke continued. “And how we practiced the year before to get there.”

Hard work is going to determine just what kind of season the Tigers are going to have. Head coach Eric Muszynski has seen how hard his past teams have worked to win their conferences.

“One of the hardest things is to get people to actually realize what it takes to get there and we did those things over the summer you know.” Musyznski continued, “And now it’s just this groups time to step up and see if they can take it to the next level.”

This is where seniors Steinke, Kory Henigan, and Nic Taratuta will need to come through for the team. They were all part of Hillman’s perfect 2016-17 season and learned a lot about what they need to do to prepare.

They’ll be the base for Hillman’s offense and defense this season. They’ll also be the leaders and set the tone for practice and games. Even with the spotlight on him, Taratuta still lets his teammates shine.

“It’s all about the team,” said Taratuta. “No one here is selfish. Everyone works for one another.”

It’s clear that this Hillman team wants to follow in the foot steps of their past seasons, but they also want to have their own identity. They’re replacing 4 of their 5 starters from last season and have plenty of new pieces.

“Looking at a lot of the kids who’ve stepped up and a lot of the new kids, they’re bringing a lot to the table for us,” said Henigan. “So I think we’re going to have a pretty successful season.”

Rebuilding or rebranding, Hillman will see their first action on December third when they host the Oscoda Owls. The first game is JV at 4:30pm. The boy’s varsity will follow that game, followed by the girls.

Monarchs just too much for Lumberjacks