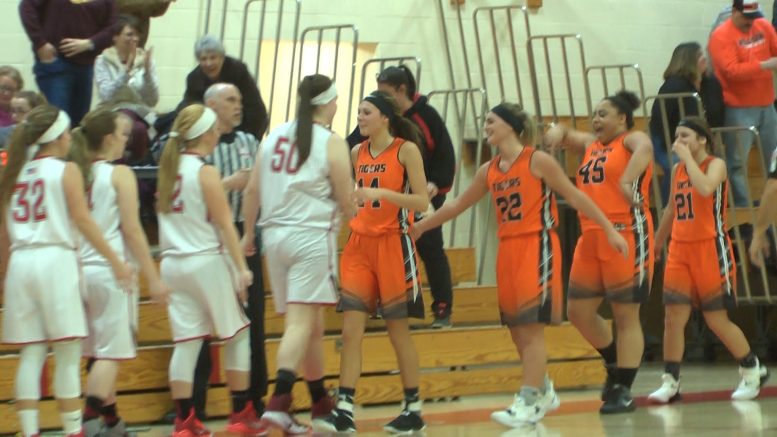 Hillman and Posen shake hands following Hillman's last second victory over the Vikings. The win keeps Hillman in the chase for the NSL's Little Dipper title.

Posen, Mich —  Vikings head coach Karl Momrik has won 199 career games with Posen. A win against Hillman Thursday night would not only give him his 200th career win, but it would also give the Posen girls the Little Dipper title.

The Vikings built up a 17-9 lead over the Tigers after the first quarter, but Ali Samp’s buzzer beater shifted the momentum of the game. Posen still held a 29-23 lead coming out of halftime, but couldn’t keep pace with the Tigers in the second half.

Samp would once again score the clutch bucket: this time with only 20 seconds remaining in the game. Emma Libby set Samp up outside, but Samp was able to dribble and make the clutch layup.

Hillman’s defense held for the final 20 seconds as the Tigers won 46-44. Coach Momrik’s next chance to reach 200 is in Fairview on Tuesday. Posen still holds the top spot in the Little Dipper even with the loss.

Alcona sends off seniors with win over Hillman