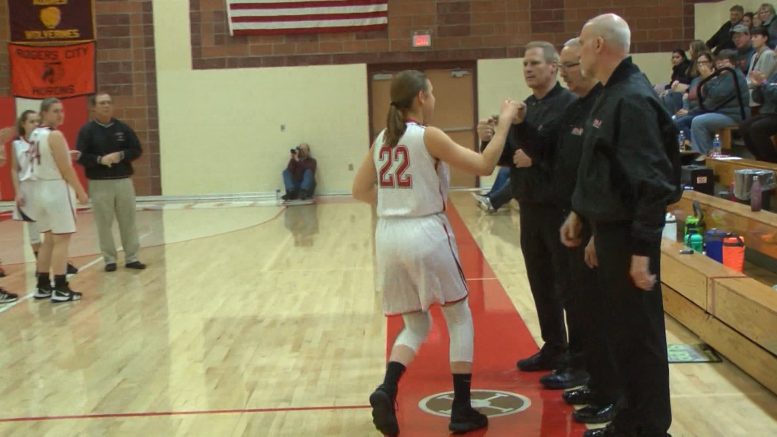 POSEN, Mich. — The Posen Vikings girls basketball team have a special edition to their roster this season. Elena Kalbitzer, a foreign exchange student from Germany, went from living in a huge city in Berlin to moving to a small town in Posen. Overall, it was a enormous change for Elena.

“In Berlin, nobody really knows you, except friends and family, said Kalbitzer. “In Posen, it’s more of a community. Everyone helps each other out and I really like that.”

At first, she was a little nervous to move nearly 4,100 miles away from home. However, she was very excited to experience America.

“I didn’t know anyone, so I felt lost,” said Kalbitzer. “However, at the same time, I wasn’t lost, because everyone here in Posen is so nice.”

Elena has a lot of basketball experience under her belt in Germany. The Vikings are very excited to have Elena on this years squad. Not only she’s a huge asset for the Vikings, but her coaches and teammates think she’s a great person to be with.

“She has great character,” said Posen head coach Karl Momrik. “It’s really a huge blessing to have her on our team.”

Elena has been putting up solid numbers for the Vikings this season. She’s averaging 12 points and nine rebounds a game, but as a team she helped the Vikings capture their third-straight Little Dipper Title.

Kalbitzer and the Vikings are a game away from winning a District Title. This Friday, the Vikings will be in Hillman for a meeting with the Tigers. The opening tip is scheduled for 7 p.m.

Oscoda’s Owen Franklin’s Slam against Hale is our top play of the week.