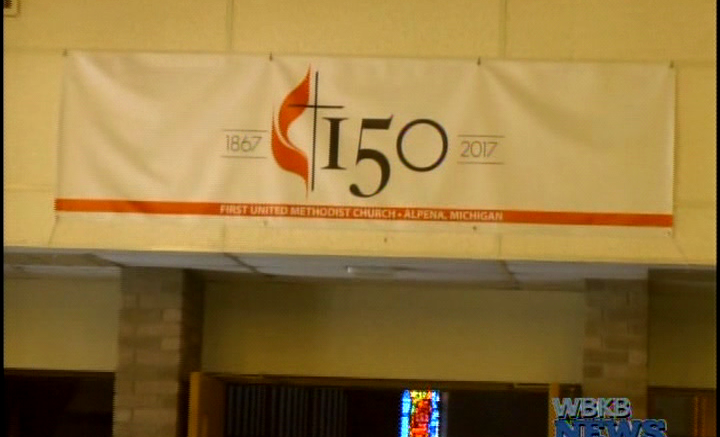 Imagine attending a church that’s over 150 years old, having one historical feature, like the bell behind me, which you hear everyday in this town. That’s why the First United Methodist Church in Alpena is celebrating their 150th anniversary.

It all started back in 1867 when this church was created. First United Methodist Church in Alpena Michigan is crossing a major achievement standing tall for over one hundred and 50 years.

“The exact date that they became a congregation was April 17, 1867. They have been worshipers in the community since the 1850s. We date our history, in 1867, 150 years. The church has been in 3 different locations. Our first location was where St. Mary’s Catholic Church is today. That was our first location. The second location was on Chisholm Street, there’s not even a building anymore, and then we came to this location where we’ve been since 1966,” Law said.

Growing over the years and since moving from Miller, to Chisholm and now Ripley Street, Law said there’s been a lot of change, but for the good.

“We’ve had 44 different ministers at this church. Pastor Sue’s our 44th. I just think we have that ability to survive, and to go through all of the ups and downs of life in a congregation of life with our families. We come out feeling good and feeling like we’re still hanging together and enjoying life,” Law said.

Ministering for over 20 years, and preaching in Alpena since 2016, Pastor Sue Platt is the first woman to become pastor at First United Methodist Church.

She said she’s excited to celebrate the anniversary. “It’s exciting that we can still be here at 150 years old, after the beginning of the United Methodist. It’s great to be able to say we’re still moving forward, we’re still growing, we’re still here,” Platt said.

Being 150 years old is a big deal, that’s why the church will be having more than one event. Including a special service on Sunday April 23rd, and in October at the A-Plex.

First United Methodist Church will be celebrating their 150th anniversary with a ribbon cutting ceremony on Monday.