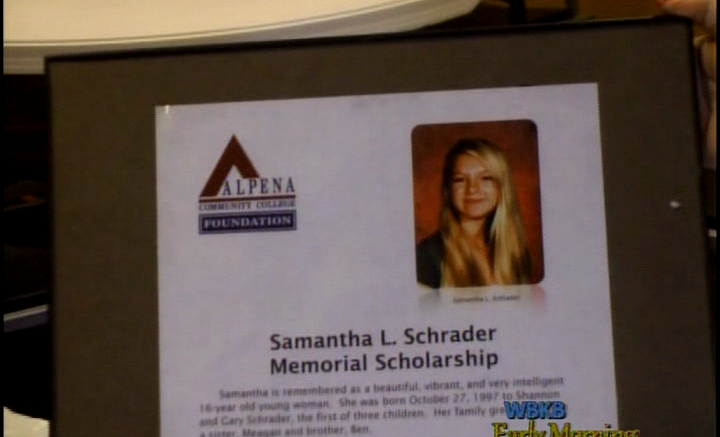 One local family is hosting a scholarship fund in the name of an Alpena girl who lost her life in a tragic car accident almost three years ago.

On September 7th 2014 one family’s life was changed when 16-year-old Samantha Lyn Schrader lost her life in a tragic car accident.

What do you do to pick up the pieces her heartache? That’s when Samantha’s family got the idea to help out other teens with their future college careers.

“It started out very small. We did it at the Alpena Eagles it was a beanbag tournament to raise some money and we weren’t even positive what actually at the time it was going towards. We were kind of thinking on the long of scholarships or something. It turned out to be so many people helping, and turned out to be wonderful,” Roxanne Misiak, Sam’s Aunt, the fundraiser host said.

Saturday will mark the third annual scholarship fundraiser in Sam’s honor. The funds in the past have helped over 18 students pay their tuition while attending Alpena Community College.

“The first scholarship fundraiser we did after we lost Sam we were able to raise scholarships for 6 kids and they were $500 a piece. Last year with our 2nd fundraiser we were able to double that amount with 12 kids getting a scholarship each getting $500. This year we’re hoping to double that amount if we can from the communities help. It’s just been a blessing to be able to honor such a beautiful young girl and have someone get the education that she was deprived of losing her life so young,” Fundraiser host, Saleana Wilder said.

Wilder’s daughter was a friend with Sam. She says the ladies adored each other.

“Sam had a very special group of friends and they were called the ‘Perfect 10.’ Where one went the other one went. They were never jealous of each other and their friendship. They spent a lot of time together they loved playing games and just being goofy and silly, doing things like bowling, going for ice cream, and the movies…It’s just beautiful the friendship that she had with her friends,” Wilder said.

Sam was a bright young lady who made straight A’s and even scored a 31 on her first act. She also ranked top 4 percent of the United States. As for memories… Misiak said her niece is truly missed.

“Samantha I love you and miss you. Be with us on Saturday. We want this to be a great turnout for you,” Misiak said.