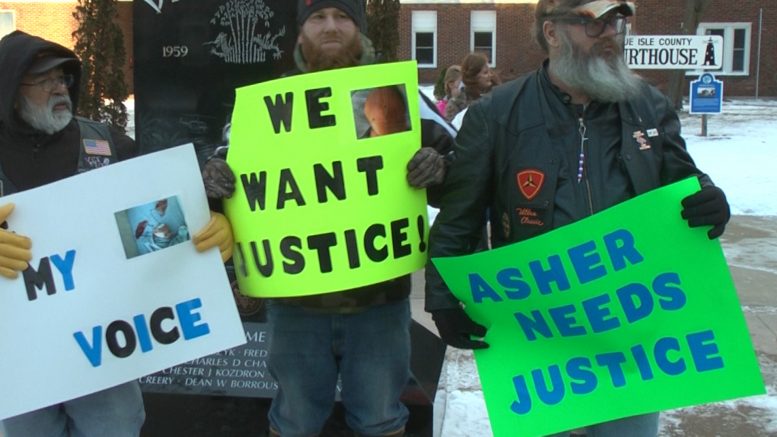 Rogers City — The Presque Isle County Courthouse saw quite a bit of action Wednesday evening as a group of residents gathered, seeking action for an infant child.

Friends and family including riders of the veteran group Agent Orange held up signs that read “Justice for Asher” in the frigid cold.

Back in August, Asher Pommerenke sustained major injuries and head trauma. He was picked up from his father’s home by his mother. The boy had black and blue eyes. He was immediately rushed to the hospital.

After a week in the NICU, Asher was taken home but then started seizing and was rushed to Helen DeVos Children’s Hospital. He underwent surgery to remove fluids from his head.

“A warrant has been on the prosecutor’s desk for several months now,” said Sobeck. “The police and CPS wrapped up their investigation, that’s why the warrant is sitting, and we just want to have that signed and get Asher his justice.”

Little did Sobeck and the supporters know that Prosecuting Attorney Kenneth Radzibon signed the paperwork for a warrant on Monday. The grandmother was not informed, but now the friends and family can leave the authorities to finding justice for the baby.

“I want to thank everyone who has come out to support, the police, CPS, and the prosecutor for finally signing this warrant,” said Sobeck.

The charges were not disclosed at this time.