A Flood Warning is now in effect in Iosco and Ogemaw counties until 3:30 a.m. Nearly 3 inches of rain have been measured in Oscoda, and nearly 4 inches in West Branch. There are reports of water-covered roads in the Flood Warning area. Do not drive through flooded roadways, it’s often hard to tell how deep the water really is — “Turn around, don’t down!” 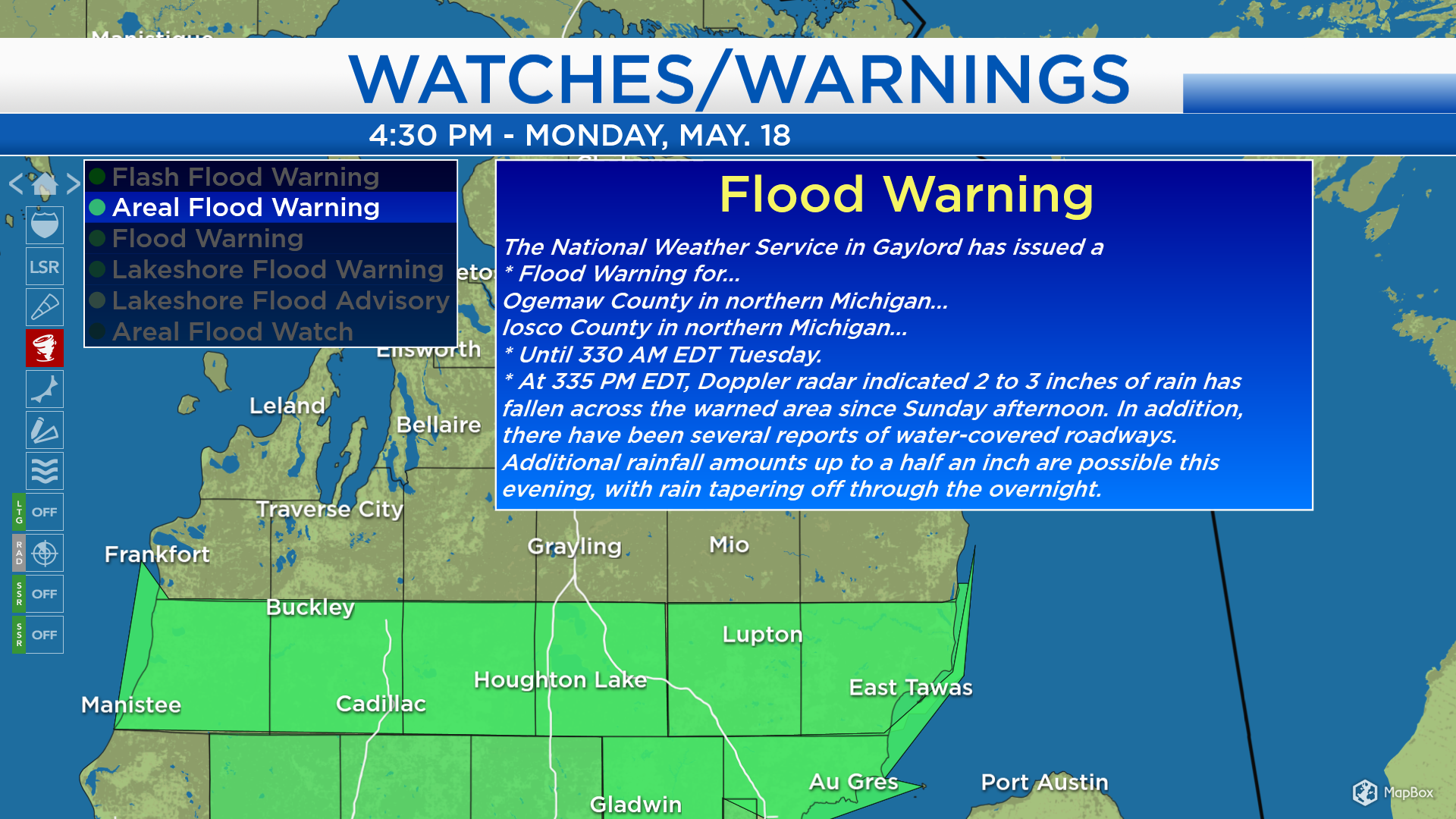 Along the Lake Huron shoreline, a Lakeshore Flood Advisory is in effect from Alpena to Saginaw Bay. Minor flooding is possible, and be cautious of standing water in low-lying areas. This advisory remains in effect into Tuesday morning. 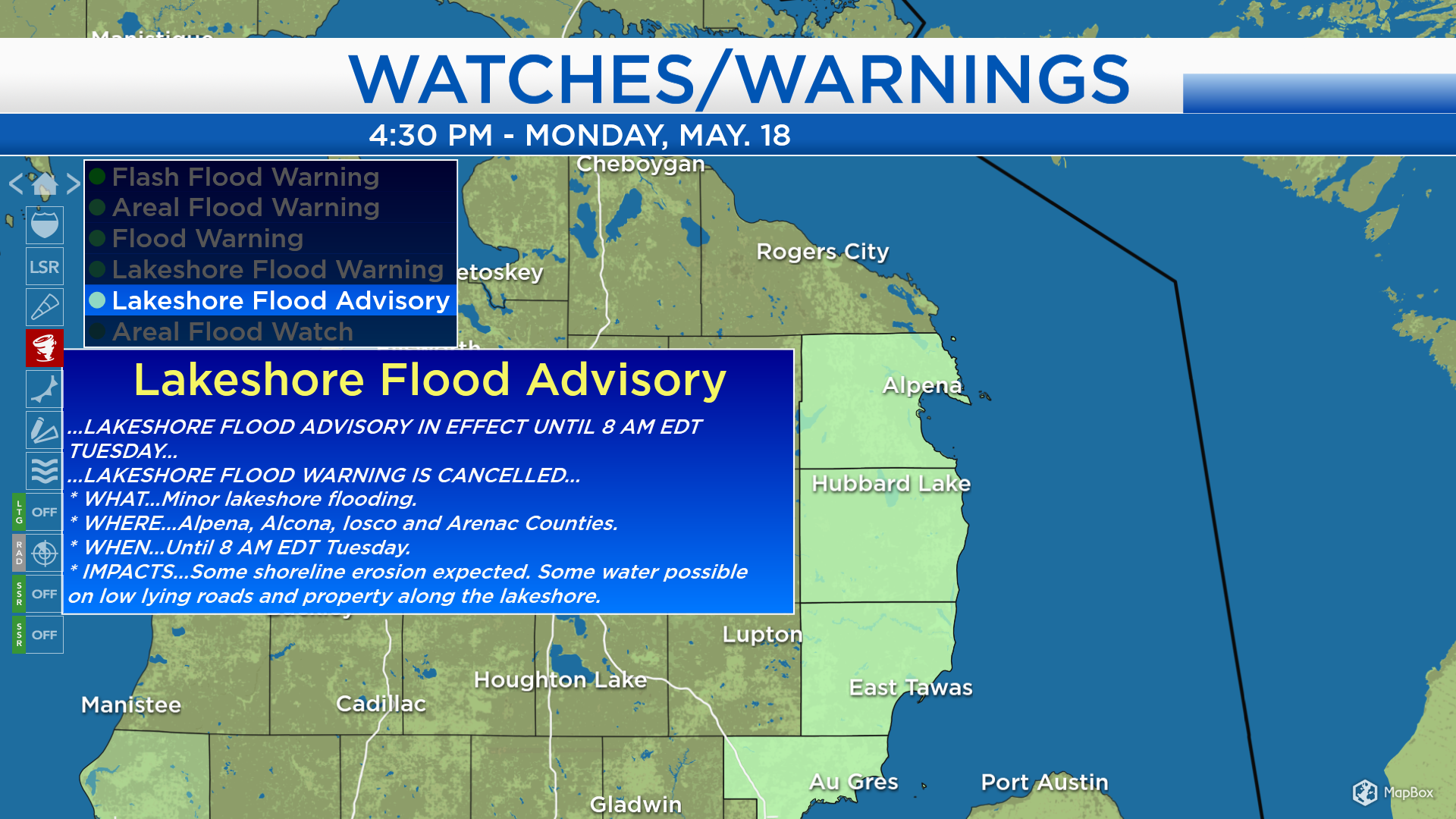 A slow-moving area of low pressure has traveled from Iowa to Illinois over the past 24 hours. It is drawing up moisture from the Gulf of Mexico to the Great Lakes. Scattered showers will remain in Northeast Michigan through tonight.

Arthur is the first named tropical storm in the Atlantic Basin this season. It is brushing by the coast of North Carolina with high winds and heavy rain now moving off of the coastline. Its path will curve to the east and southeast over the next couple days. This system will end up near Bermuda on Thursday as a weaker post-tropical depression. 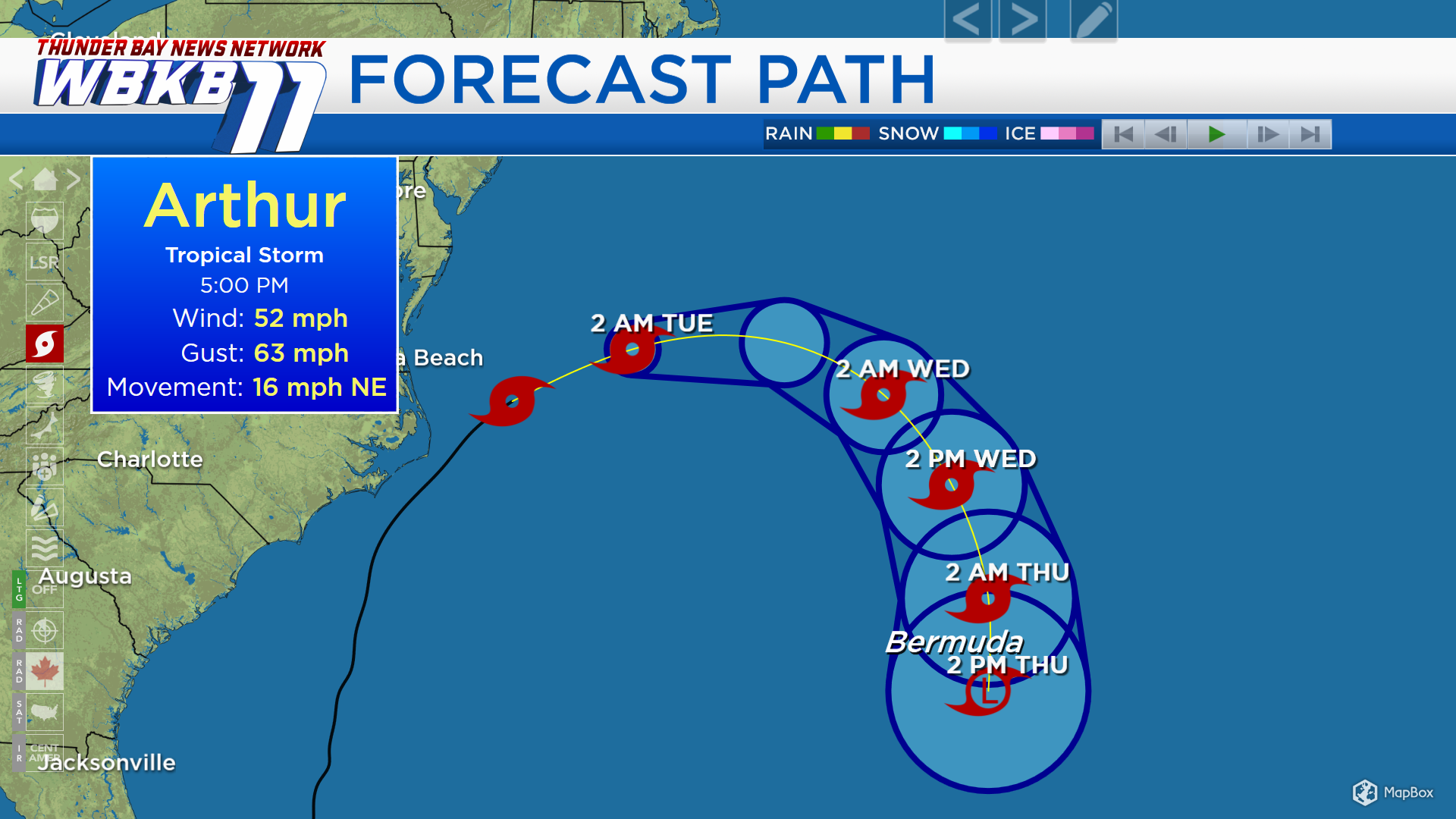 Highs will be in the upper 50s Tuesday, and a gradual warming trend is in store for the rest of the week, as the winds out of the southeast are forecast for the middle and end of the week. Highs will reach the middle 60s Wednesday, upper 60s Thursday, and get close to 70 degrees Friday. 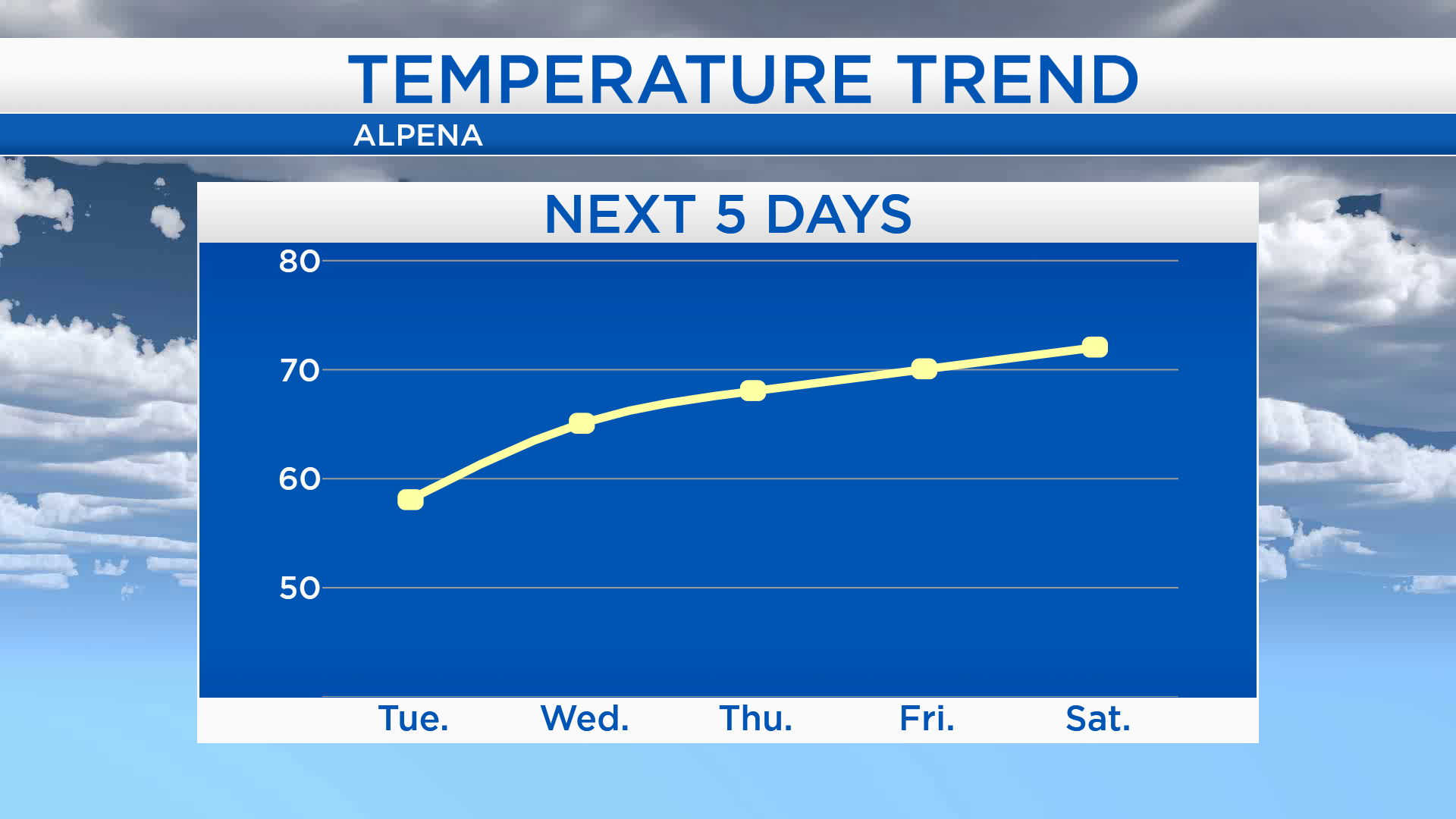 Lows tonight will cool to about 44 degrees with scattered showers. A patchy shower is possible early Tuesday, but we should also see some sunshine breaking through by midday. High temperatures will reach about 58 degrees Tuesday afternoon. Wednesday will be mostly sunny with highs in the middle 50s. Thursday will be sunny all day with highs in the upper 60s. For the rest of Northeast Michigan’s weather forecast, watch the latest weather video by clicking the weather tab at the top of the page. 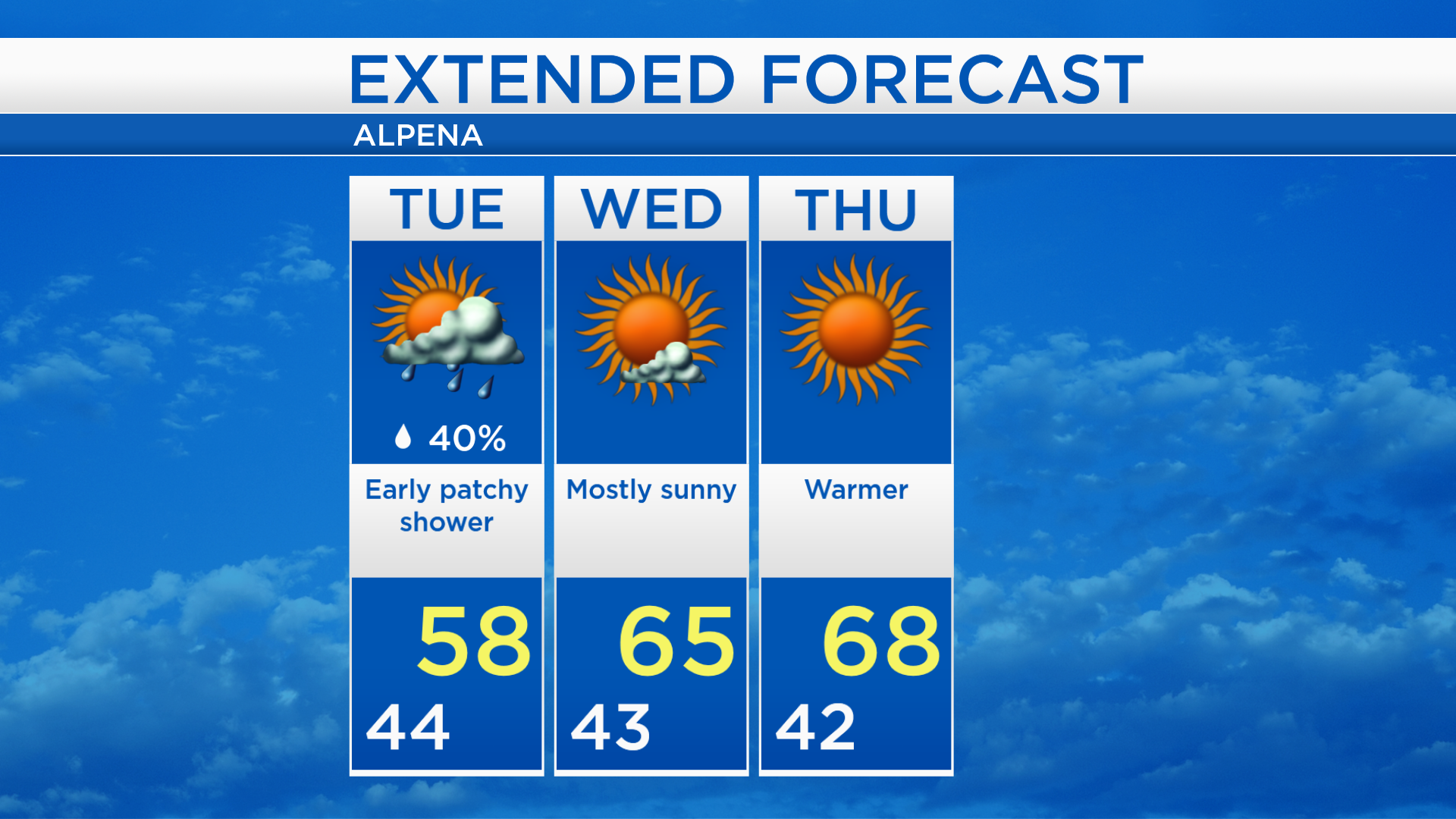