It’s the maiden voyage for the Viking Octantis in the Great Lakes.

Some of the passengers started in Antarctica, going through Canada, and eventually making its way to Alpena. Those aboard, including Terri Stevens from California, had the chance to come ashore and take in what the city has to offer. “I think it’s great,” she said. “I love the small town feel and we walked in and had lunch at Mango’s, Mexican restaurant. The food was very good and it was a nice break from the ship food.” 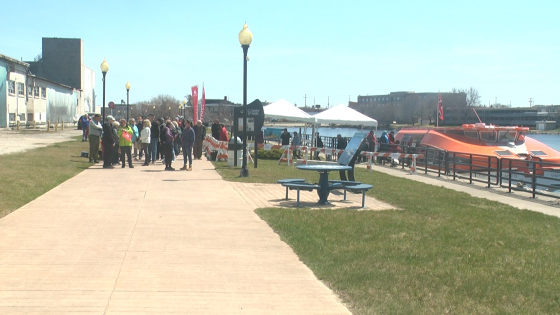 They also had a chance to learn more about the area thanks to NOAA and the Thunder Bay National Marine Sanctuary. “Their sanctuary experience, while they’re here in Alpena, is a glass bottom boat tour into shipwreck alley and guided exploration of our maritime heritage exhibits,” said Stephanie Gandulla, resource protection coordinator with the sanctuary.

“It’s been a very big learning experience and the tour we had today here in Alpena was very informative,” said Stevens. “I didn’t know it was called Shipwreck Alley.”

There is also a large number of researchers aboard, collecting data throughout the journey and working with NOAA to analyze the information. “They have state of the art scientific equipment, state of the art labs, and research vessels they can deploy,” Gandulla said. “Part of NOAA’s partnership with Viking Expeditions is to learn more about our Great Lakes.”

Following the stop in Alpena on Wednesday, the Octantis began making it’s way to Mackinac Island.