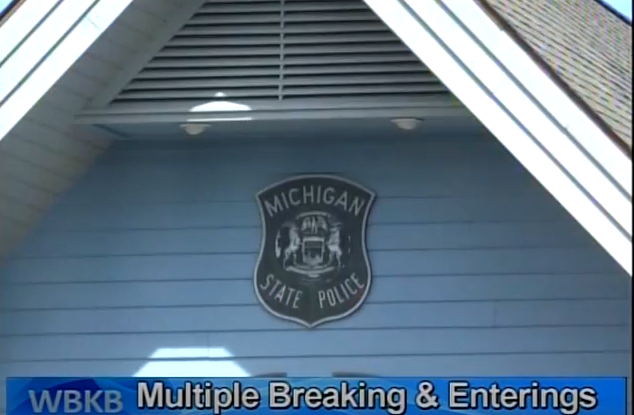 The Michigan State Police Alpena Post is asking for the public’s help in solving a number of breaking and enterings that happened on Long Rapids Road in Alpena County near the Montmorency County line.

According to MSP, several hunting camps were broken into back in December 2016.

Items taken from the camps include, a cordless Porter Cable drill, a circular saw, a battery operated light and chargers, a Chicago Electric Sawzall, and hand grinder.

A 9.5 hp Johnson boat motor, that is white and green, was also taken. Other items stolen include, 2 Ameristep pop up hunting blinds and a 5 gallon gas can.

A black Ardisam Ice Auger, a sliver colored Haulmaster four wheeler ramps that is 1000lbs capacity, and a blue 1996 Polaris 300 Express four wheeler with a gray seat with the letters “MA” located on the handlebars were taken too.

Michigan State Police Alpena Post says if anyone has information about these crimes please contact crime stoppers at 1–800–422–jail. If anyone would like to add additional information they can also call 989-820-1963. A $1,000 reward will be given to anyone who can help with solving these crimes.