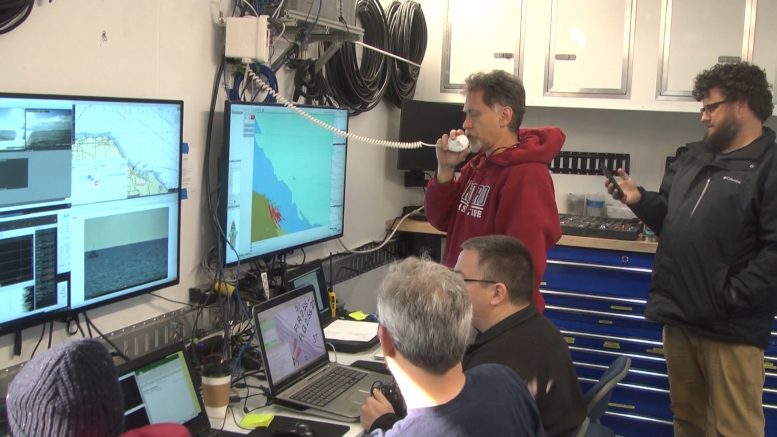 (Photo Courtesy/Mike Beiermeister) Members of the University of New Hampshire's Center for Coastal and Ocean Mapping examine the incoming data from the ASV BEN.

Rogers City, Mich. — Exploring the unexplored will be the theme over the next two weeks as researchers and marine scientists plan to map three sections of the Thunder Bay National Marine Sanctuary.

Research project engineer Val Schmidt watches the data flow in and monitors the ASV BEN as it makes it’s way to the designated zones.

“When everything goes really well, it’s totally boring which is great, and when it doesn’t go well, it gets exciting, which is not so great,” said Schmidt. “It should go just fine. We worked really hard to get here.”

Another group works on board the vessel Storm, acting as a first responder should weather get to extreme or technology fail with the ASV BEN. Marine scientists on the Storm also collect data and relay information back to shore to help in their collecting.

“We have two vessels operating in tandem,” said Erin Heffron, mapping coordinator for the Ocean Exploration Trust. “We keep an eye on things while we are doing the work. We can see what is coming in on the sonar, but then, to actually get the data and dig through it and see what we found, is probably the best part of my day.”

The focus for this two-week exploration are the major shipping routes just off of Rogers City as well as the Thunder Bay River. With much of the area uncharted, the teams hope to bring these historic beacons to light.

“I’m just excited everyday to see what we find, and so, we really have things going pretty smoothly,” said Heffron.

“When we come together and make things work,” said Schmidt. “It is the best feeling ever.”

If you would like to get a look inside the process and technology, head to the Great Lakes Maritime Heritage Center on Saturday from 10:00 a.m. until 3:00 p.m. The crew will be mapping the Thunder Bay River during that time. Students and visitors are invited to interact with the visiting hydrographers, surveyors, and other marine scientists.

Photo of the Day for Monday, January 28