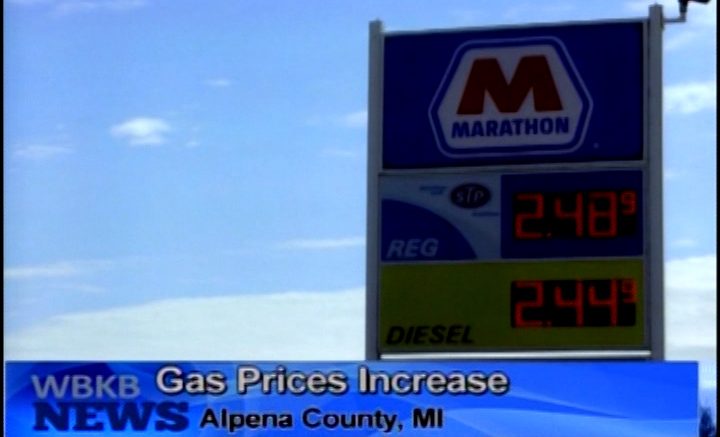 As we’re getting into the spring season, not only are temperatures increasing- but so are gas prices. Over the past week, the price of gas has jumped up $0.12. The new statewide average is around $2.57 per gallon.

The average price of gas is about $0.58 more than it was around this time last year. AAA branch manager Brian Sienkiewicz says the increase is a result of our current relationship with Syria, along with a few other factors.

“The conflict in Syria has led to some speculation because there’s some political unrest in that area that has negatively affected the oil supply,” said Brain Sienkiewicz AAA Branch Manager of Alpena.

In addition to Syria, warmer temperatures are also causing an increase in gas—along with a few statewide and local issues.

“Switching from the lower grade Winter gasoline blend to the Summer blend has driven the cost up because it’s a little bit more of an expensive blend that they use for the Spring and Summertime driving,” explained Sienkiewicz. “In addition to that, there’s been some unplanned repairs that some of the local refineries and also with some of the pipelines as well, which is tightening supply.”

Brian also says that we may not see any changes any time soon.

Board of Commissioners Gets New Secretary