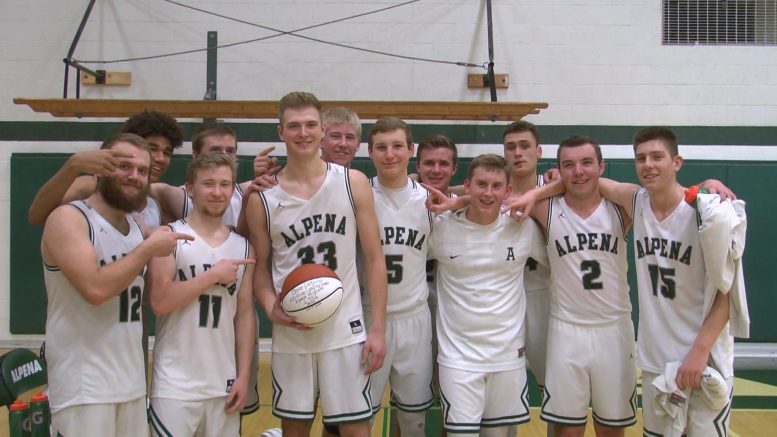 ALPENA, MICH — Alpena senior Chris DeRocher had a chance to shoot for history Tuesday night against the Sault Ste. Marie Blue Devils. Students, family and fans packed the gymnasium, hoping to witness the historic event, and DeRocher only needed 29 points to top a record that has stood 47 years. Raymond “Butch” Feher scored 1,435 points as a Wildcat from (1969-72).

“It would be really exciting,” said DeRocher’s younger sister Allie. “I’ve always looked up to him as a player because he’s obviously really good and he’s worked really hard for it over the years.”

The senior needed to shake the jitters off before scoring his first bucket with 3:06 left in the first quarter. Once DeRocher got momentum, he kept rolling scoring 10 first quarter points. A few key passes from teammates and outside three-pointers gave DeRocher 21 points at halftime, only eight away from breaking the record. The Wildcats held a 39-16 lead.

The six-foot-six Wildcat came close to clinching history in the third, but two missed threes made everyone anxiously wait till the fourth quarter. Then with 6:49 left to play the moment happened. Sault Ste. Marie’s Michael Goldenbogen fouled DeRocher on the layup and he was sent to the charity strike. He made the first free throw, and that’s all he needed to become Alpena’s all-time scoring leader with 1,436 points. DeRocher ended the game with 29 points.

“I never came here thinking I was going to be able to do that,” said DeRocher. “I want to thank Coach (John) Pintar for letting me, a tall lengthy freshman, get the chance to break this record and just be here.”

Alpena High School honored DeRocher with a basketball with his name and record written in ink, and the senior headed straight toward the stands to hand the ball off to his grandpa Oliver DeRocher.

“In four years, I missed one ball game,” said grandpa Oliver. “I couldn’t find nobody to take my place. That is the only game I missed in four years of him playing. I was shocked when he brought it (the ball) up to me and gave it to me. I don’t know, he must think a lot of his grandpa.”

The Wildcats went on to defeat the Blue Devils 74-45 improving to a (10-2) overall record.