High temperatures today reached the lower and middle 60s for most of Northeast Michigan. Winds out of the southeast at 10-15 mph kept temperatures slightly cooler near the shoreline. To the southwest of Alpena, temperatures got close to 70 degrees this afternoon. 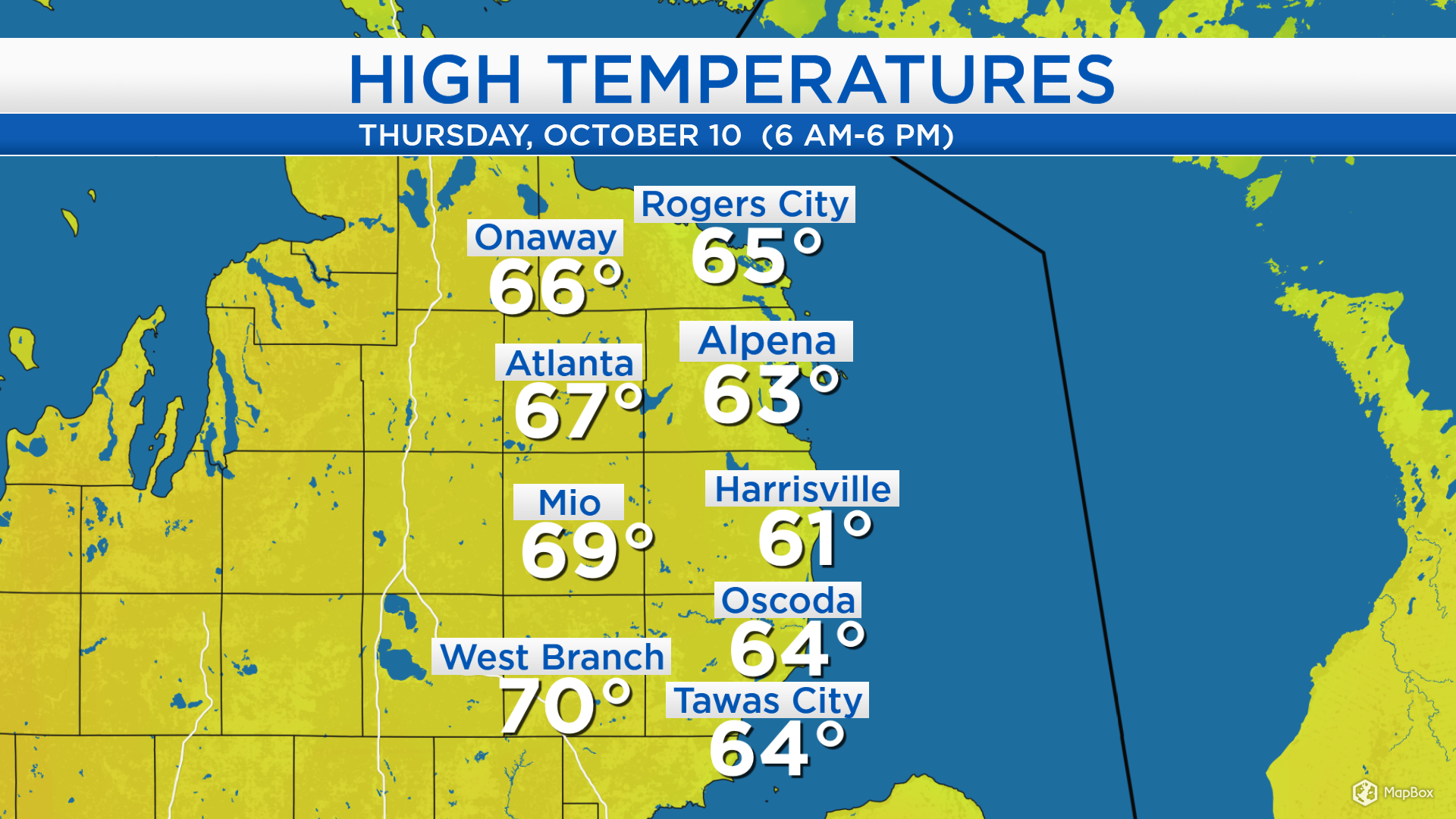 A storm system currently centered over Minnesota is traveling toward the northeast, and its cold front extends all the way to Texas! Ahead of this cold front, rain will move in tomorrow afternoon and become steadier in the evening. Also, it’s cold enough to the northwest of the storm’s center for a snowstorm happening tonight in North Dakota, South Dakota and Nebraska. However, it will not be getting that cold or that snowy in Northern Michigan. After the cold front moves through our area, temperatures will get much colder this weekend.

Low temperatures tonight will cool to about 50 degrees as cloud cover increases. Tomorrow will start with mostly cloudy skies and morning temperatures in the middle 50s. High temperatures will reach about 66 degrees and wind gusts will pick up out of the southeast, occasionally peaking near 30 mph. Steady rain is likely tomorrow evening. 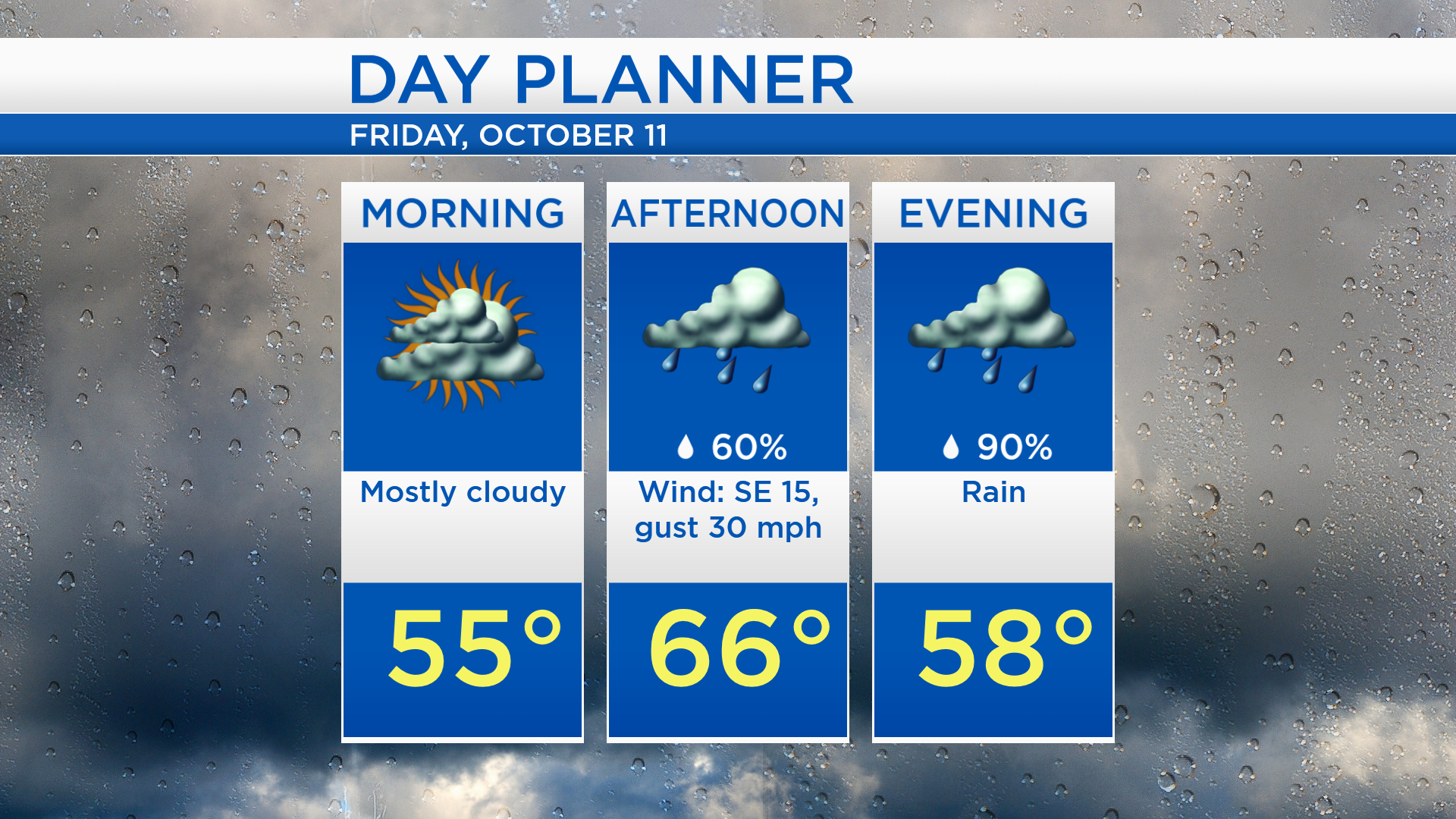 Afternoon rainfall amounts will achieve 0.25 inches at most. Much of the rainfall will take place tomorrow evening, and will result in 0.75-1 inch of total rainfall across Northeast Michigan. The map below shows projected rainfall amounts from early Friday to early Saturday. 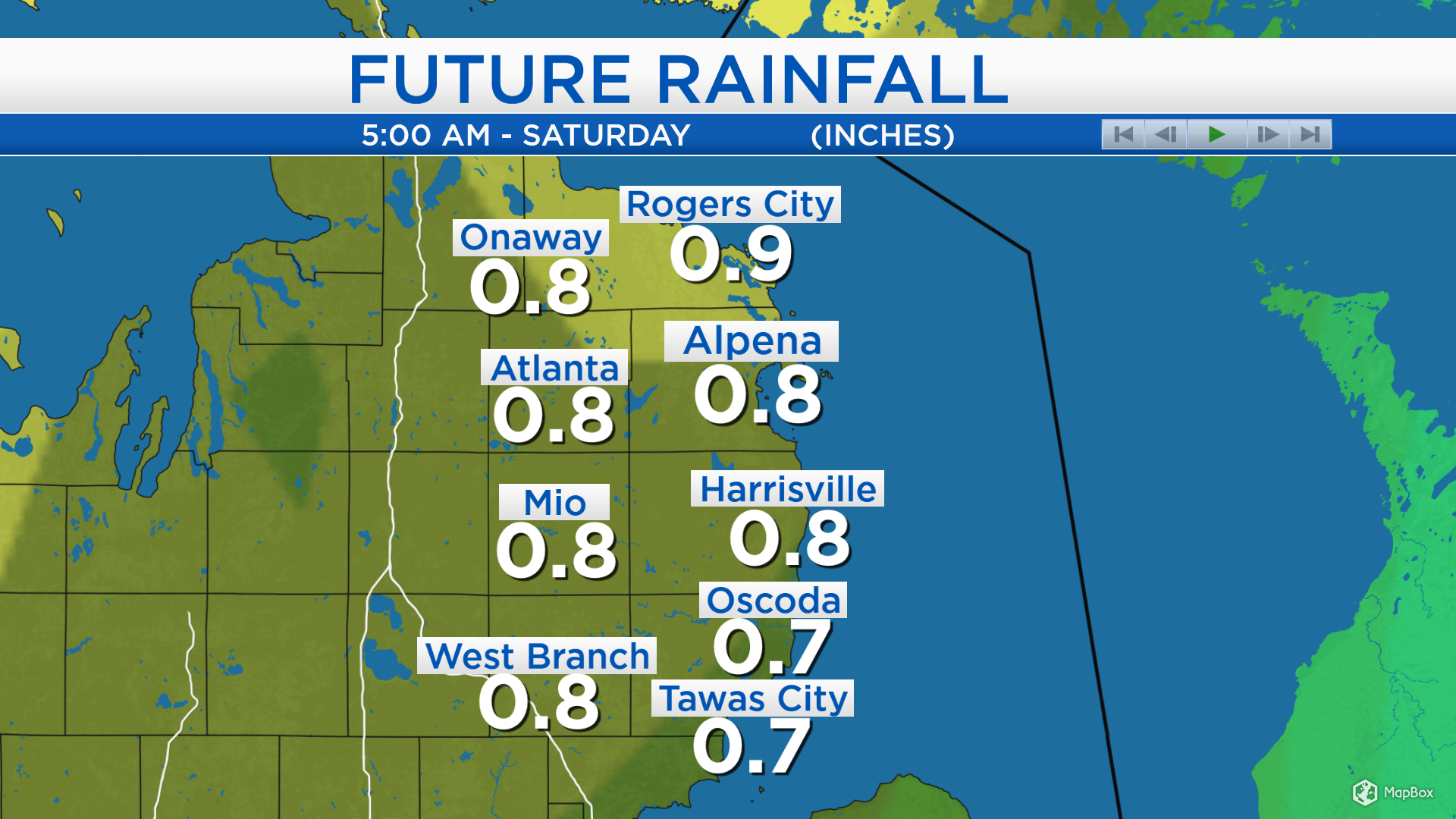 For the high school football game of the week hosted in Alpena, it’s going to be breezy and wet. Temperatures will start in the lower 60s at kickoff, and cool to the middle 50s throughout the evening. Winds will come from the southeast at 15-20 mph. 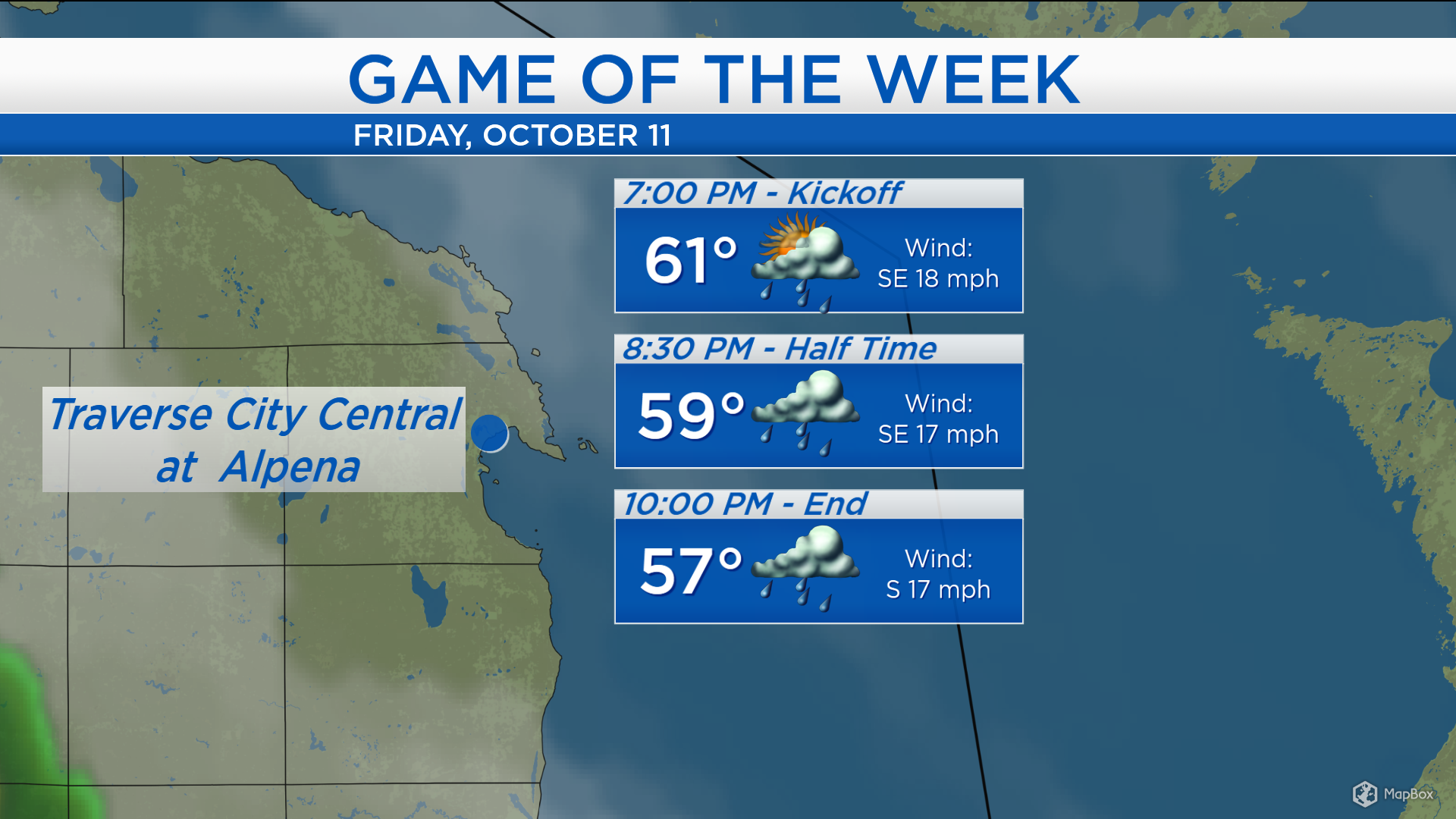 Tomorrow will start dry and end wet, so grab an umbrella and jacket as you head out the door because you’ll need those in the afternoon and evening. High temperatures on Saturday will reach only the upper 40s with mostly cloudy skies. A few flurries are possible early Sunday followed by a chance of patchy rain showers and highs the upper 40s. Afternoon temperatures will climb to the lower 50s early next week. For the rest of Northeast Michigan’s weather forecast, watch the latest weather video by clicking the weather tab at the top of the page. 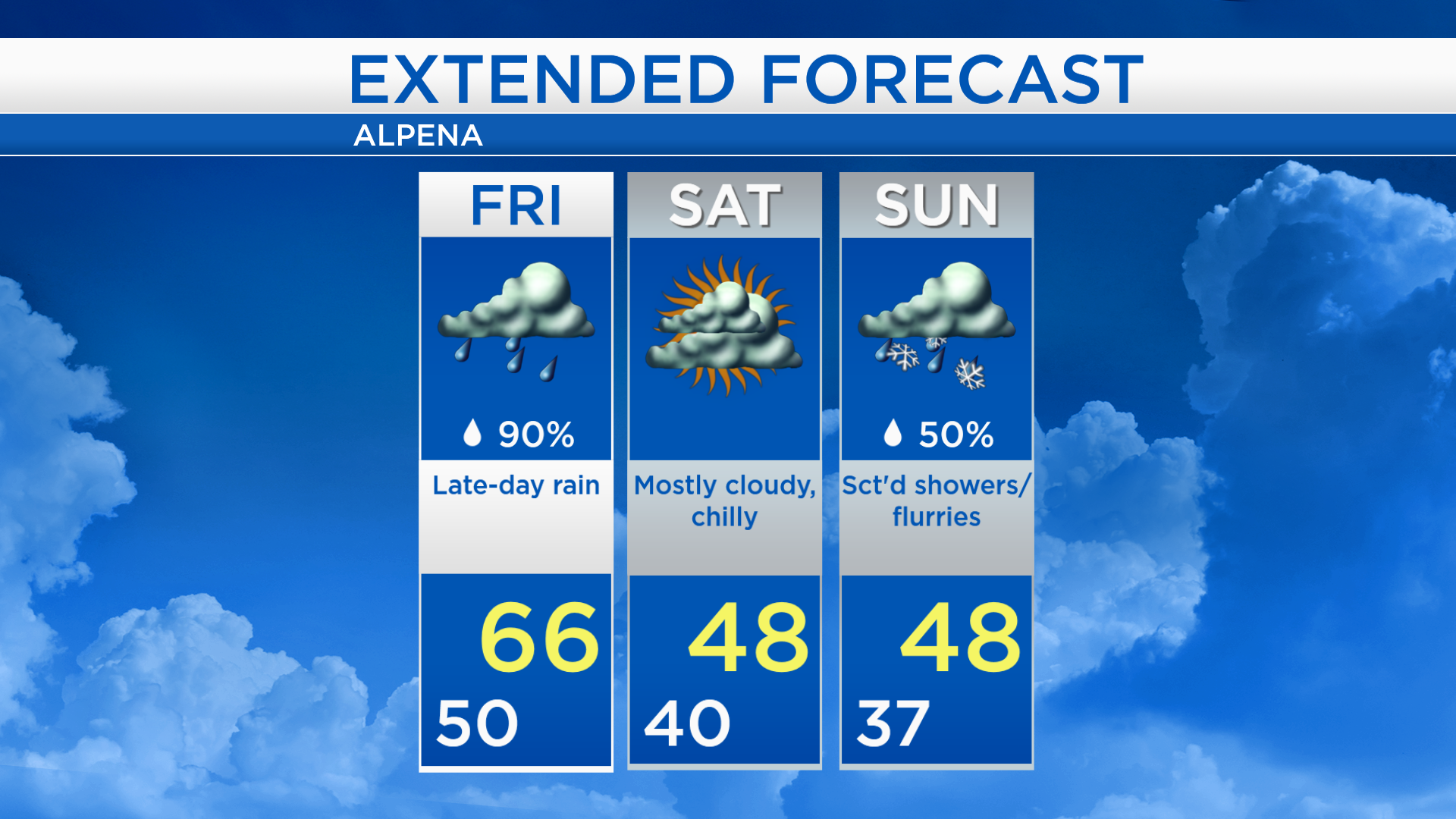