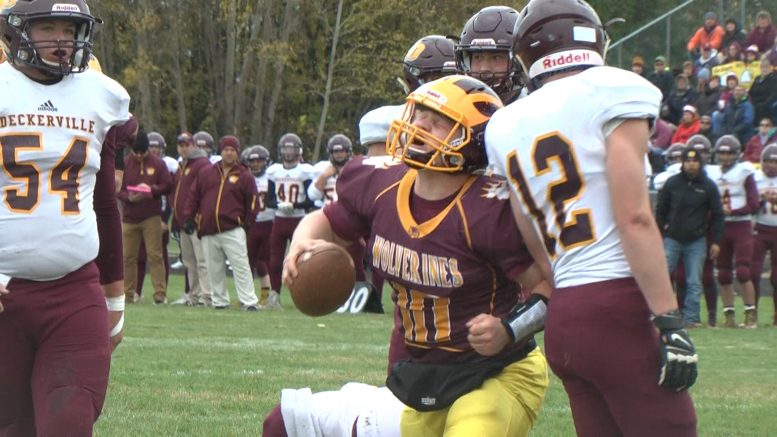 AU GRES-SIMS — The Au Gres-Sims Wolverines (10-0) hosted the Deckerville Eagles (8-2) for the Wolverines’ first ever regional final. Au Gres-Sims held the Eagles on their first possesion and then the Wolverines scored first on a 10-yard quarterback keeper by senior Caden Zeien. Extra point was not good for the 6-0 lead. Senior Zander Forton scored two rushing on the following drives to put the Wolverines up 18-0.

Eagles finally answered in the second quarter. Junior quarterback Isaac Keinath carried the ball himself for a 15-yard gain to the 2-yard line and Derek Snyder punched it in. Eagles were down 26-8. The Wolverines scored three more touchdowns ending the half 50-16. Second half, senior Ryan Schwiderson took over on the ground for Au Gres-Sims hauling in three rushing touchdowns.

“We had some guys that stepped up today that you know they’ve played great all season long,” said Caden Zeien. “That’s just the one thing about our defense. You take away one thing and we’re just going to hit you with another one and keep throwing different guys at you who can make big plays like Ben (Salgat), Zander and Isaac (Beardsley). All those guys did today.”

Up next the Wolverines travel to Pickford to face the Panthers in the state semifinal on Saturday, November 10th at 3 p.m. This year marks Pickford’s third straight state semifinal appearance.

Winter’s TD run is the top play of week 9