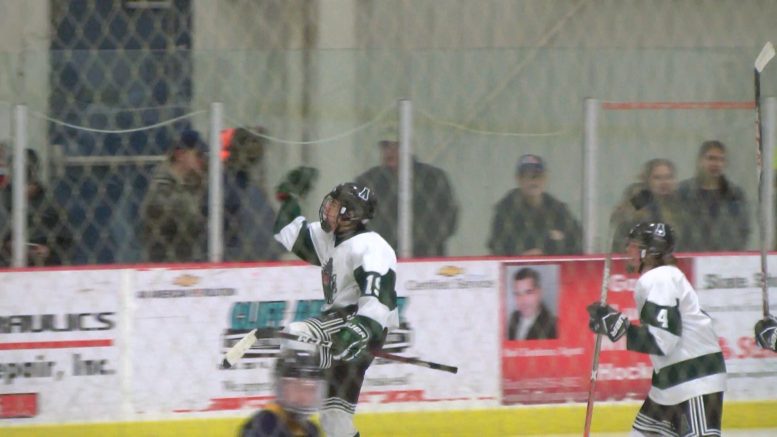 Keegan Mathews celebrates after scoring his second goal of the season and giving the Wildcats a 3-1 lead in the second period.

ALPENA — The game was suspended until a later date due to broken compressors at Northern Lights Arena. The surface temperature was 35 degrees, which caused the ice to begin melting. Water began pooling on the surface and players were having a hard time staying on their feet as a result.

The ice held up for a period and a half, with Alpena holding a 3-1 lead. Play will resume on a day to be determined with 8:30 to go in the second period. Had they been able to play through two periods, Alpena would have been credited with the win (assuming the Wildcats held the lead).

Alpena drew first blood through almost 5 minutes of play. Kyle VanDusen intercepted a pass from Gaylord’s Sean Jardine in front of the Blue Devils net and made it past Gaylord goalie Caleb Pettis.

The Blue Devils tied the game with 2:50 to go in the first. Jon Allen’s one timer clipped Cooper Black’s glove hand and made it to the back of the net.

It was prearranged that Alpena and Gaylord would skip the first intermission and play half of the second period before the ice issues forced the game’s suspension. Both “The Pond” and “The Puddle” rinks were affected by the broken compressors. Fans were told that the teams would try and play the game on “The Puddle,” but that rink was in the same state as the “The Pond.”

There is no word yet on when the rest of the game will be played. As of January 19th at 1:16am, Saturday’s game against Sault Saint Marie is still on.

Alpena vaulters can win state despite lack of equipment