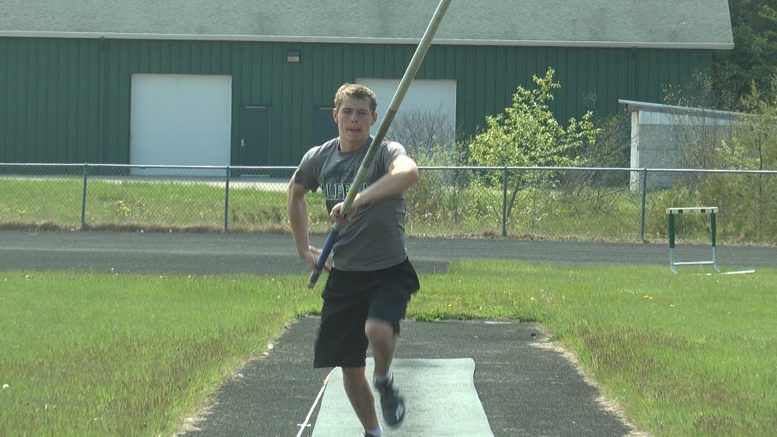 Alpena, Mich — Athletes have to wait one more day before competing in the Michigan Division 1 state track meet. Alpena is traveling with nine boys and three girls. The Wildcats have prepared up to the last day, including nationally ranked vaulter Gabe Bullis.

“Breaking 16′ would mean a lot to me as a junior,” said Alpena junior Bullis. “Being able to do something like that would put me at one of the top juniors in the nation.”

Bullis is one of three Wildcat pole vaulters advancing to states, along with Josiah Matuzak and Karli Myers. Bullis currently ranks in the top 15 for junior vaulters in the nation. Vaulting is a costly sport that prevents many schools from giving it a chance.

“Last year I went through about eight or nine poles because we kept getting bigger ones and then I’d figure out how to use it and how to rotate it in,” said Bullis. “Then I couldn’t use in competition anymore. This year I’ve only been able to go through about three because we don’t have what we need to get me more poles.”

The better a vaulter gets, the more poles they have to rotate through, and there are many factors that go into picking the right pole.

“I’m going to be taking three poles with me for competition. Really it’s the thickness and the weight that will determine how much it throws you, but they also have a flex number. The flex number determines how much they’ll bend and where they’ll bend. Having more poles for me would help me with all sorts different situations, with temperature with wind. With how the runway is built. Whether I have my spikes or not. It really determines how the entire competition is going to go.”

Bullis has a chance to win the state title on Saturday, June 1st and place at nationals this season, but not having the proper poles could hinder his chances in a sport he loves.

“You feel really cool to just be able to bend a big pole like this and have it throw you that high into the air. It’s not something you get to experience anywhere else.”

Excavation is underway at Park Family Field at Wildcat Stadium