Alpena, Mich. — 1997 Alpena graduate Melissa Brousseau left her mark in many ways at AHS. The two-time state champion shot put thrower’s name can be found on the school’s wall of fame, in the gym and at the track on the record boards. Current throwers look up to Brousseau as an example for what they can achieve.

She credits her power and strength to her faith. Brousseau holds the Alpena shot put record at 44’9 3/4″. She took her talent to Central Michigan University and grew even stronger, squatting 425 pounds, deadlifting 350 and bench pressing 225. 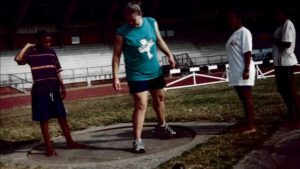 Brousseau has always loved helping people. In college she traveled to South Africa with Athletes in Action after the apartheid. Teaching them how to throw was a memory she will never forget.

Now in 2019, she coaches younger kids the proper form for throwing in Midland, Michigan.

Krawczak, Skowronek’s Lake Trout are the Fish of the Week