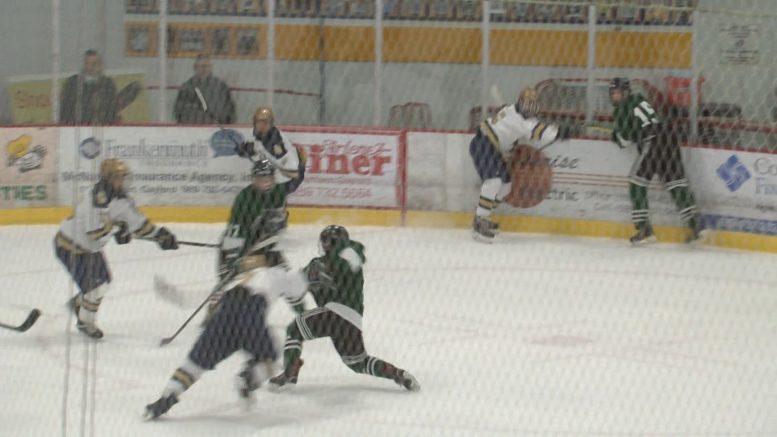 GAYLORD, MI — The (8) Alpena Wildcats traveled to Gaylord to compete in the division 3 hockey showcase. On Friday, the green and white faced the defending state champions, the (4) Detroit Country Day Yellowjackets. A tough match from beginning to end, especially for the Wildcats defense and Cooper Black. The senior saved 34 shots on goal and didn’t give up a shot until the third period with 3:28 left.

The Wildcats put up 13 shots against 2017’s Mr. Hockey goalie Sam Evola and finally one hit the net, a one-timer by Kyle VanDusen, with 00:00.7 seconds to go! A great no-look assist by Anthony Berg. The crowd went wild and the Wildcats tied up the game at 1-all, which was the final score.

Alpena broke Detroit Country Day’s undefeated record. The last time the Yellowjackets lost a game was December 16, 2017. VanDusen was shocked he got that puck in to light the lamp.

“I just saw Anthony went to the corner and fired a pass out to the slot,” said VanDusen. “I don’t even know if I looked at the net. I just let it go and it went in. Yeah it was amazing.”

This tie for the Wildcats proves to the teams down state that Alpena can hang with the big time teams.

“We should be able to see them in playoffs if we get far enough, so if we get there they will be ready for us,” said Black. “It’s definitely not going to be an underdog statement anymore. They know we’re good.”

Up next, the Wildcats face the FNV Griffins on Saturday at 4 p.m. in Gaylord.

Alpena goes (4-0) after taking down Cheboygan