Alpena residents gathered at city hall on Friday to voice their frustrations over a lingering odor in the north side of town.

Different descriptions are being given regarding the smell and none of them are pleasant. “It smells like death, like something that’s dead. Rotten cabbage that has sat on your kitchen table for days in the heat,” said Barb Woodham, a resident living on Ford Avenue “Whatever it is, it’s rotten. There’s no other way to describe it. It’s gut–wrenching. People are actually vomiting, headaches, you can’t take it. I’ve rented a hotel room.” 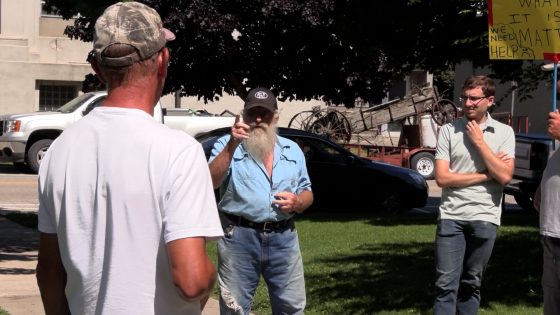 This isn’t the first year a smell has taken over the north side of the city. “2019, you smelled a little bit what smelled like dog poop in the neighborhood,” Woodham said. “Last year, you would get this rotten smell a little bit. This year it’s horrendous.”

According to the city, there are multiple sources where the smell could be coming from. An air quality inspector from Gaylord found one of them on Friday. They were able to pinpoint the smell to a lagoon at DPI. “That’s about as much as we know at this point,” said Steve Shultz, Alpena city engineer. “We’ve been very unlucky thus far because they’ve been in town a couple times and the wind has not cooperated and the smell has not been here. There were here today and were able to pin point it so that’s good news and that’s a start.”

Mayor Matt Waligora listened to the complaints and told the residents what they should do to help solve the situation. He said they should ontact the Air Quality Division of the state of Michigan.  “They’re the immediate place that wants to know where are you located what date and time it is and describe the smell as best you can and perhaps the wind direction if you know it,” he said.

Several of Friday’s protesters, including Woodham, brought up the possibility of a lawsuit if the smell is not removed.

Biggest Meteor Shower of the Summer Peaks this Week