School officials are taking serious measures after learning racist words, homophobic statements, and anti–Semitic symbols have been painted on the rock in front of Alpena High School.

On May 7, Alpena Public Schools learned racist words, homophobic statements, and anti–Semitic signs had been painted on the rock in front of the high school. “We woke up the next morning, saw that, and took what we thought was the appropriate action and immediately painted over it so people wouldn’t have to see those words and symbols,” said David Rabbideau, superintendent of Alpena Public Schools. “Then we made a statement through our high school news letter that following Sunday about the incident.”

On Tuesday, schools officials apologized for not releasing information right after the incident occurred. “We put the situation out through an announcement,” said Rabbideau. “We officially haven’t taken a stance and or talked about what it was because our initial statement just said it was inappropriate what was written on that rock.” 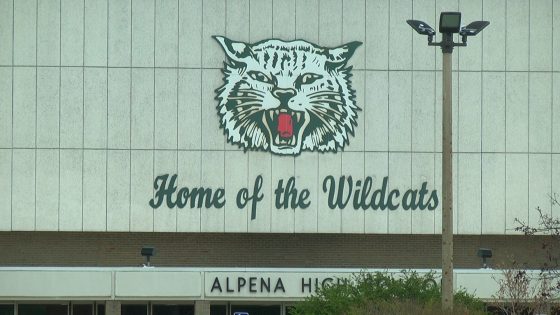 According to a press release, the district said, “Alpena Public Schools strives to create a kind and welcoming environment for all students, and we recognize that there is still work to be done to achieve this goal.”

“The first in this particular situation is naming what took place . We do have students that fortunately did not have to walk by that rock and see it because we were able to cover it up, but they are harmed by those words; acknowledging, that is the first step, and then there’s much more work to be done after that.” said Rabbideau.

The students use the rock as a bulletin board to display celebrations and currents events.