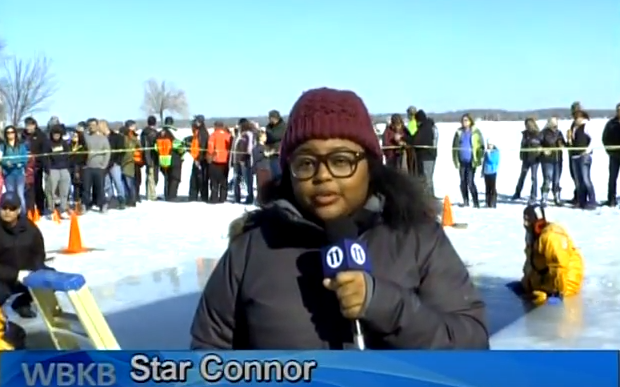 Hundreds of residents showed up to watch over 40 people take the plunge into icy cold waters on Saturday. I was able to go out and take a look myself here’s that story.

Hundreds of people are here today at sand bar grill to watch over 40 people take a plunge, not just any plunge but a polar plunge for a great cause.

It was unusual warm weather Saturday, but that didn’t mean that some people were about to freeze. Over 40 people took the icy jump for a good cause.

Sand Bar Grill was a packed out restaurant as tons of on lookers watched brave ones plunge into cold waters. The 9th Annual Alpena Polar Plunge was a huge success collecting over $7,000 for Special Olympics.

“We have to think outside of the box to raise money for the Special Olympics. This has been a phenomenal fundraiser for the state, and people are just willing to do crazy things to raise money and see who can be the best money raiser, and the best costume,” Whitscell said.

It wasn’t all about jumping in ice; it was also about the unique costumes. Daring to take a dive, new Alpena resident, Michael Kukuris said giving back was a way to say thank you for all of the people who helped him with his move to the area.

“I’m really happy about it, (polar plunge) because we had a lot of help moving up here. So I thought it could be the least I could do to give back to some other cause because I’ve met a lot of the athletics and stuff here and it was nice to talk to them, and get to know them, and to see what our jumps are going towards,” Kukuris said.

Saturday’s lucky winner went to a man not only with team USA spirit, but also a man who himself has over come special needs challenges.

There was a moment of silence for former State Representative, Peter Pettalia who hosted Special Olympics and Polar Plunges in the past.

Pettalia died tragically last year. The Long Lake location was just one of 27 locations this year for the state of Michigan.

Softball On Ice Makes A Return!

WBKB News Team Takes A Plunge For a Great Cause!