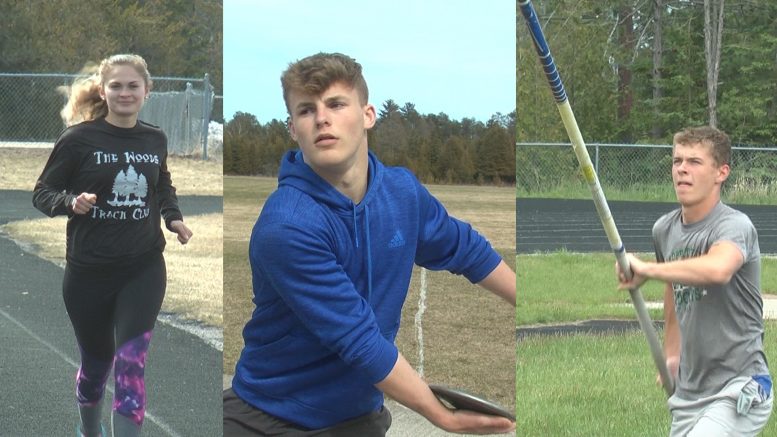 The discus thrower, Winter, launted a disc 170′ at the Shake Off the Rust Invitational in Davison on Friday. The junior is the second best in Michigan and top throw in Division 1.

“I knew it was a good one,” said Winter. “I didn’t think it was going that far, but then when I hit it I felt the rush of adrenaline and I just wanted to go further after that.”

Winter and Thrower Head Coach Jamie Bullis credit the juniors improvement in discus to his offseason work and time in the weight room.

“Eli works hard. He’s in the weight room four days a week. Coach (Aaron) Sims has done a good job with the weight program,” said Bullis. “He works year round. I think that’s the key. There’s no off switch for Eli.”

Another junior that reached a huge feat is Gabe Bullis. The Wildcat cleared 15′ 7 ” in pole vault, which qualifies Bullis for a trip to the New Balance Nationals outdoor meet. He held the previous record at 15′ last season. Now Bullis is the best in the state and one of the top in the nation.

“That’s a huge achievement for me,” said Gabe Bullis. “Like I never thought I could make it this far as a vaulter. I was thinking scholarships for college or whatever. Knowing that I’m one of the top in the nation and I can be recognized for that is a pretty awesome achievement for me.”

For the girls, senior Maddy Boyd leads the charge. She broke the school’s 3200 meter record with a time of 11:21.88 seconds. The Central Michigan signee sits 13th in the state.

“I had already ran the 1600, so it was just really excited and I felt good during the whole time,” said Boyd. “I actually didn’t know I was on pace for it until the last 50 meters. I saw the clock and was like oh my gosh it’s in reach! I just sprinted and finished, so that was cool.”

These athletes never quit, always show up to practice and put in the extra time in the offseason.

“It’s been a long time since Alpena has put out athletes of this caliber,” said Jamie Bullis. “I mean if that’s not exciting I don’t know what is. Not just for the athletes themselves, but for Alpena as a community.”

Mitchell picks up his first win as Head Coach

Titans cruise past the Wildcats