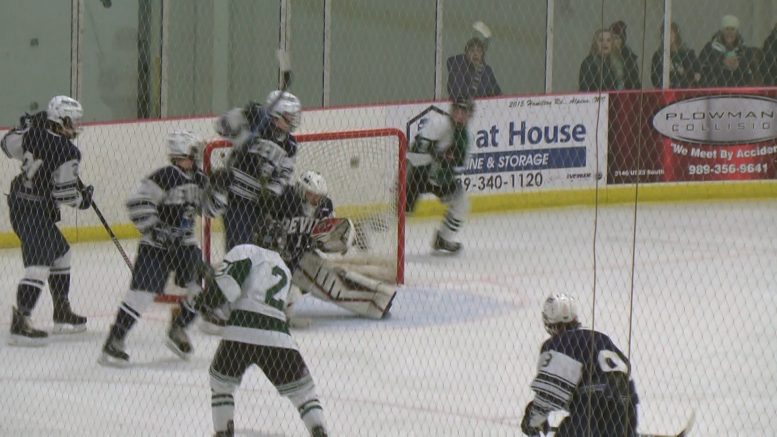 Senior forward Kyle VanDusen's goal to give Alpena a 1-0 lead in the first period.

ALPENA — There were no issues with the ice at Northern Lights Arena on Saturday as the Wildcats hosted Sault Ste. Marie. As of Saturday’s match, Alpena and the Soo were projected to play each other in the first round of district play.

The Wildcats started slow and were outshot 9-0 before the Wildcat offense showed signs of life. Kyle VanDusen opened the scoring with a beauty through the one hole to give Alpena a 1-0 lead with 2:50 to go in the first.

It would stay that way up until the second period. Keldon Casey shot a perfect one timer underneath Cooper Black’s glove to tie the game at 1 with 5:45 to go in the second.

The Wildcats came to life in the third. Owen Limback opened Alpena’s scoring on a breakaway with a shot from just inside the Blue Devil’s zone that trickled past the Soo’s goalie and gave Alpena a 2-1 lead. Alex Cosbitt scored his first of the game moments later. He chased down his first shot, passed to Keegan Mathews, and then found himself in front of an abandoned net to give Alpena a 3-1 lead.

Cosbitt scored again from the neutral zone, and Evan Kraenzlein scored his first of the season as the Wildcats overcame their slow start to win 5-1. Cooper Black had 34 saves in the winning effort. Alpena is now 12-4-1 on the season.

Their next test is Friday in Traverse City against TC West. They’ll be back home on Saturday as they host Petoskey.

On to the Next Round