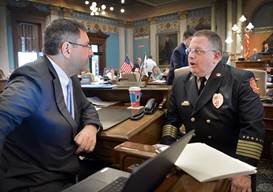 Alpena Fire Chief Bill Forbush made a trip to Lansing yesterday, testifying in front of the Michigan senate in support of a new senate bill.


36th District State Senator Jim Stamas invited Forbush to Lansing, to testify in front of the Senate Transportation Committee in support of Senate Bill 46, a bill co–sponsored by Senator Stamas.


“Senator Stamas actually contacted me, we work them on a number of different issues, he’s authoring the fire fighter training bill right now. And so while we were talking about those kinds of things, this bill came up and he was willing to sponsor it with Senator Zorn and we’ve been side by side throughout the program,” explained Forbush.


The bill would allow the use of corner flashing lights on emergency vehicles as an option, instead of rotating lights that are attached to the roof.


Chief Forbush believes the new bill is a necessity, after a recent change to the motor vehicle code.”


“In September they changed the law to include green lights for snow plows, when they did the moved a couple things around and inadvertently made that section applicable to all emergency vehicles. The reason the Michigan Association of Fire Chiefs, and Northern Michigan Fire Chiefs are concerned about it, is that many fire chief vehicles are semi–marked and may not have overhead lights…virtually all modern ambulances, to meet the Federal NHFS specs for ambulances, the lights must mounted on the side box and not on the roof,” added Forbush.


Chief Forbush says the concern is not with getting a ticket, but to limit the liability an emergency vehicle could have if it was involved in an accident.