For 17 years Steven Kieliszewski has served the area as Alpena County sheriff.

Since taking the position he’s helped grow the department and, perhaps his biggest achievement, brought a new jail to the county.

His last day was on Friday and it was bittersweet and when he stepped into the office it was hard to keep his emotions in check. He credits the community for much of the progress the department has made over the years. “I can’t thank the community enough for all of their support,” he said. “They’ve entrusted me with this office for the last 17 years, and it certainly has been a privilege serving the community and serving the citizens.” 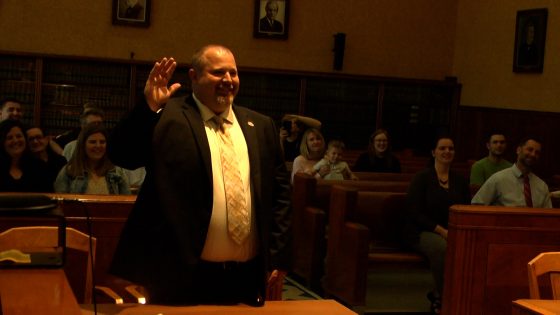 With the Kieliszewski officially retired, a selection committee made up of the probate court judge, county prosecutor, and county clerk had to select his replacement.

The deadline to apply was for the position was on Friday. There was only one applicant, Kieliszewski’s Undersheriff Erik Smith. That made it easy for the committee to make the decision Smith was sworn in as the next Alpena County Sheriff that same day.

Smith said he has some big shoes to fill, but he plans to do his best in serving Alpena County. “When I was promoted to undersheriff, I turned and I looked to the board of commissioners and people in the stands and said I would do my very best everyday and that’s what I pledge to our community,” he said.