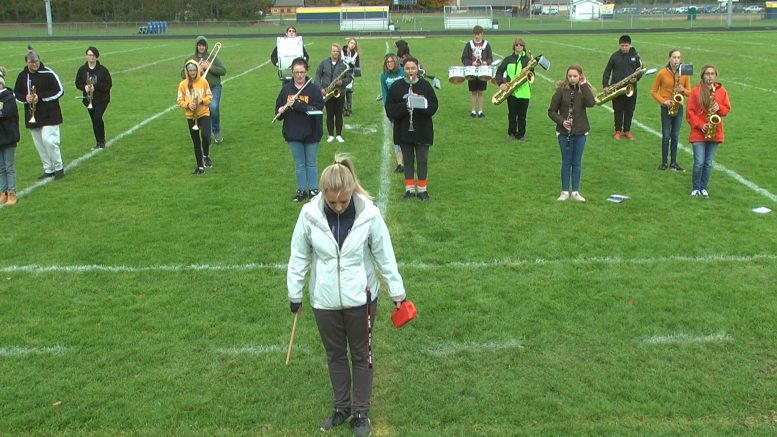 Alcona, Mich. — It’s been about 10 years since Alcona High School had a marching band. Now the program is making music again, bringing spirit to their school.

For a while, a lack of funds kept Alcona from hiring a band director. One student, Ben Thomas, now a senior, decided to help raise money to get program going again. Eventually enough money was raised to hire a part time director, and soon later someone was able to come in full time.

Current band director Emma Pendergrass was hired last year and said that this is a dream come true for her. “I’ve known since I was in 7th grade band myself that I wanted to be a band director,” she said. “To be able to create my own program is something that not a lot of people get to do. So I was really excited when they called and offered me the job.”

The marching band currently has 22 members that take the field on football night to perform. Among those is clarinetist, Amanda de Souza, who says that there’s a new energy that’s been brought to the school. “When there was no marching band it was kind of just like, the school spirit was just kind of dead but now that the bands here it’s really alive,” she said.

The band is currently holding a fundraiser to keep improving the program. By visiting the website centuryresources.com and using the code 49511, you can browse a large catalog of items for sale. Forty percent of the profit from each purchase will go to the band. “They’re hoping to raise money for new stands, new uniforms, new instruments. We need everything we can get to get the program running more smoothly,” said Pendergrass.

If you want to see the new Alcona marching band, they will play at their next home football game on October 25.