History most of the time can only be read about or seen in the museum, but today the wings of victory from our past are here live.

“We are here as Air Power History Tour and the Commemorative Air Force mission is to educate, honor, and inspire. Well first of all you have to have volunteers that are inspired. It’s so important for them to be brought out to the people, so they can touch them, fly in them, tour through them instead of just seeing one in a museum where they say don’t touch, no you can not look inside, so we think it’s so important.”  Allen Benzing also 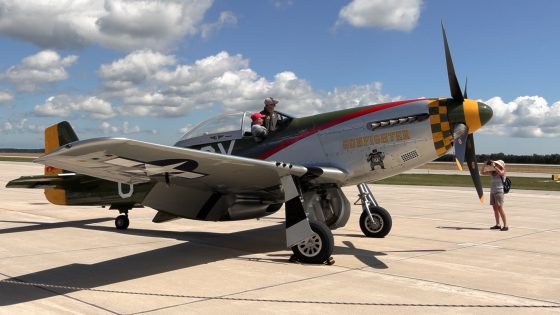 said “When we meet veterans and veterans families, were always inspired by that, you know it’s what keeps us going we know its important and so that’s why we do it and we hope that you come out, come fly with us come tour these air craft.”

Some of these air craft hold more historical significance then the others such as the AT–6 Texan flown by Jon Hullsiek.

“what I’m standing in front of is an AT–6 Texan it was trainer that was used in World War II, and there about 250 T–6 flying that’s an estimated number. What makes this one special, is that it’s the only know T–6 that trained women to fly in the Women Air Core Service Pilot, or the W.A.S.P. squadron.” He also said “”It’s a pretty historically significant airplane, and we like to bring it on tour and share that message with the public and just educate people on the historical background.”

These planes represent a time when America stood tall and fought for everyone and they deserved to be seen.