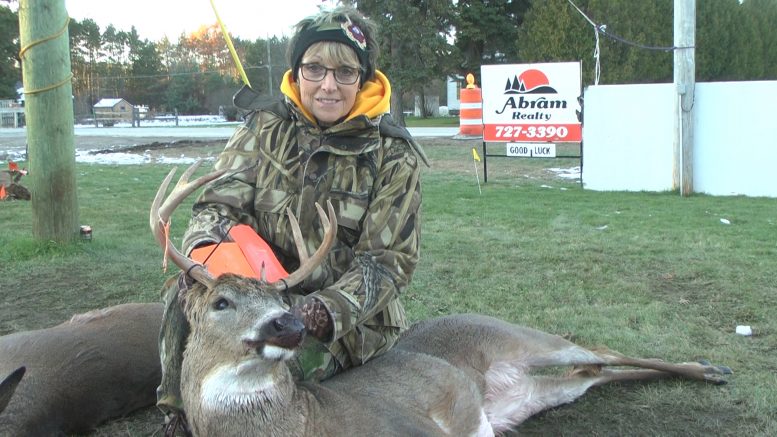 Vicky Timm had the second best Women's buck with her 8 pointer at Hubbard Lake's Buck Pole.

HUBBARD LAKE — Irvin Timm, president of the Quality Deer Management Association (QDMA), has sponsored many of our area buck poles in the early part of deer season. The organization’s goal is to preserve the quality of hunts for years to come.

Timm believes it’s important for hunters to also bring in Does and not only bucks. QDMA was also one of the sponsors for Hillman’s buck pole which also featured a doe category, though there were no participants and no does were brought in.

This wasn’t the case at the North End Restaurant. The 4 day event brought in 24 bucks, 19 does, and over 200 people for Sunday’s free pig roast. The best buck was a 180 pound 8 pointer, but the real stars were the 19 does.

“The reason we put a lot of emphasis on hunting does in Northeast Michigan is we have a TB problem,” said Timm. “And downstate they have Chronic Wasting Disease.”

Hunting both does and bucks helps prevent the spread of the diseases. It also keeps the population more balanced since mating numbers stay even.

“In order to get a healthy deer herd, you want to get a balanced deer herd and that’s why we put emphasis on harvesting does,” said Timm. “Some people neglect to harvest does because they’re old school, but there’s areas they need to be harvested.”

Photo of the Day for Thursday, May 16